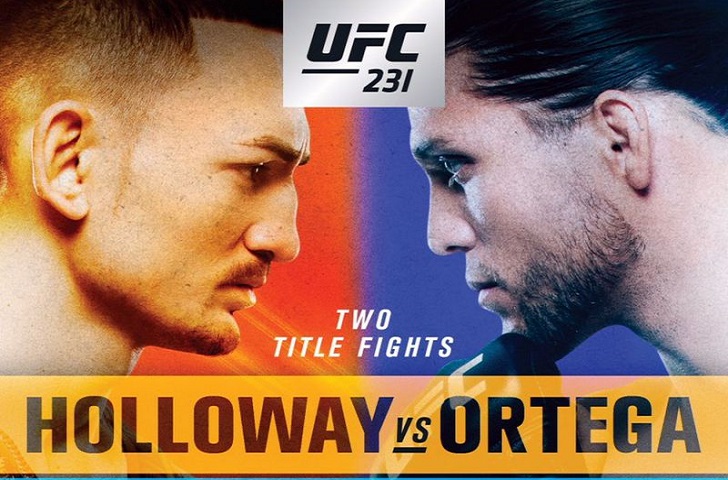 Max “Blessed” Holloway rides his 12 back to back win steak and is looking to defend his belt against one of the most creative fighters that featherweight division has ever seen. We all are looking forward to seeing the Hawaiian fighter faces blue-eyed Mexican Triangle choke engineer Brian Ortega.

Here is what these two fighters are fighting for, other than the shiny gold Strap; Brian “T-City” Ortega after his shocking win against Frankie Edgar is finally getting his shot at the belt and Maxy-Max is trying to prove that he is still the best out there and has the control over the division. We are about to see if it's still The Blessed era or the featherweight division has moved ahead without Holloway on the roaster.

Max Holloway was unable to make weight against 155 champ Khabib Nurmagomedov in his last bout which got people questioning if the 26 years old would ever be able to shrink down to 145 pounds again, but in this fight, Max along with his legacy of 12 back to back wins is putting everything on the line and facing Ortega inside the Octagon.

Read More: How Much Is Max Holloway's Net Worth and Salary Know About His House & cars

As for T-City, he is going to be tested if he is ready to take on someone like Max who is very creative and has a better conditioning than Ortega. The BJJ black belt will have to work on his movement, punches, and athletic ability before going forward against someone like Max Holloway, but Ortega has done many impossible things from the day he entered into the Octagon, we can't forget that he is the first one to knock Eggar out in 13 years.

UFC 231 is live on pay-per-view from Toronto, Ontario, Canada this Saturday in Scotiabank Arena, on December 8th. Further, The MAin event is live from 10 PM Et onwards.

What Are the Betting Odds As per various sites?

The current champion, Holloway, up until Friday was a slight fan favorite but on Saturday he went on to being a -105 underdog with the challenger, Ortega, whereas his opponent Ortega was a favorite pick at -125. Maybe because Holloway wasn't able to fight throughout the year and Ortega has remained comparatively active with a fight with Edgar, people liked Ortega's odd.

People also believed that Max might not actually be super fit, as this is the longest he laid off from the game since he started fighting with the UFC. But this was up until Midnight, Saturday, fans suddenly started putting their money on Max and till 2 Am Sunday, Max and Ortega were both at -110 points each. 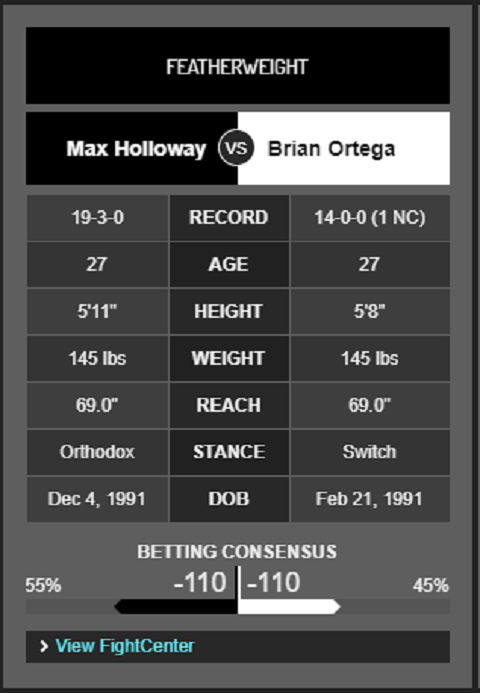 Many analysts believe that Bryan Ortega's hands are going to be raised at the end of the match and speculate him to submit Max Holloway early on.

We are not saying that Ortega isn't able to submit or finish Max, but we see the game going towards' Max Holloway's benefit because he is more experienced, comparatively younger, super creative and knows how to change target and capitalize on his shots after his opponent starts to fade away.

Ortega is more of an aggressor but that doesn't work against Max, he is faster, durable and equally athletic, Max is wise with trading shots. Hence, Ortega needs a solid game plan to decode Max Holloway. Further, Max uses his basic tricks to its absolute limit, but Ortega tries to use new things without perfecting on it.

So people who want to see the blue-eyed stud as their champion will possibly have to wait a little more.

UFC 246 Medical Suspensions: Donald Cerrone will be out for 6 months for Nasal, Orbital Fractures 22 hours by Jack Ol