Brian Ortega is an American mixed martial artist who competes under the renowned American MMA promotion, Ultimate Fighting Championship, in its featherweight division.

Brian is currently the number one contender for the featherweight belt. In the main event, he fought the reigning UFC featherweight champion, Max Holloway, in his first-ever title shot at UFC 321. Ortega suffered his very first UFC defeat against Max on December 9, 2018.

Apart from UFC, he has also received a Black belt in Brazilian Jiu-jitsu under the tutelage of Rener Gracie and was also American promotion, RFA Featherweight Champion.

Brian Ortega’s Net worth and Salary Brian has earned most of his net worth through UFC SOURCE: [email protected]

Moreover, Brian earned $52,000 after defeating Renato Moicano at UFC 214. Looking at his professional MMA career, due to his wins at UFC, he must have amassed a good deal of money through his fights, hence his net worth could be estimated to be over $350,000.

With his accumulated wealth, he loves to spend his free time relaxing in the world's most exotic and memorable places.

Brian Ortega currently 27, is 5 feet 8 inches tall and weighs around 66 kg. He has a maximum punching reach of 69 inches. Further, Brian Ortega has Blue eyes. 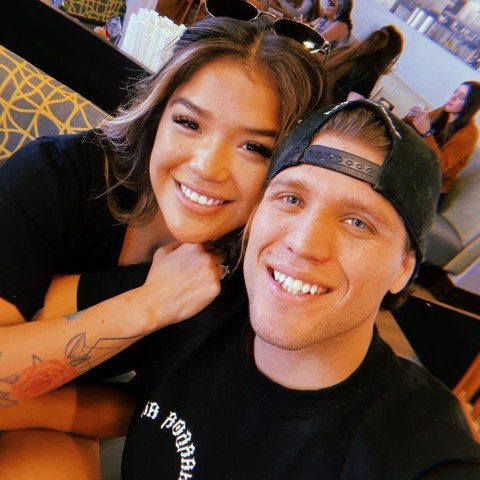 The UFC fighter is very open about his relationship status. Brian is dating his longtime girlfriend, Tracy Cortez. The love birds have been together for more than two years. Ortega has two children from his former relationships. He has not shared about their biological mother with the public.

Brian Ortega was born on February 21, 1991, in San Pedro, Los Angeles, California, USA. His star sign is Pisces. Furthermore, he is of Mexican descent and holds dual nationality, as his parents are from Hermosillo, Sonora, Mexico.

At the tender age of five, he began learning martial arts. When he turned 13, he started training Brazilian jiu-jitsu at the Gracie Jiu-Jitsu Academy and started off his fighting career with the regional MMA promotions of Southern California.

He signed with UFC in April 2014 and is scheduled to make his UFC debut against Diego Brandao at the Ultimate Fighter Brazil 3. The Finale took place on May 31, 2014.

Later, he was pulled out off due to injury and made his official debut against Mike De La Torre at UFC event, UFC on Fox 12 on July 26, 2014.

He initially won the match via rear-naked chokehold but later was altered to No contest for testing positive for drostanolone. Subsequently, he was fined $2,500 and suspended for nine months.

Brian later took on Clay Guida and won via KO in the third round at UFC 199 and later had about against Renato Moicano at UFC 214 on July 29, 2017. He was victorious through a  submission hold.

Also Read: How much is Max Holloway’s Net worth & Salary? Know about his House & Cars

He was expected to face  Max Holloway for the Feather Championship at UFC 226 on July 7, 2018, however, Holloway pulled out of the fight due to "concussion-like symptoms".

The rematch took place in Toronto at UFC 231. Brain Ortega fought Holloway in UFC 231's main event and after four rounds of action, the fight ended with a doctor's stoppage. Ortega Suffered his first-ever UFC loss against Max Holloway on 8th December 2018.