Gilbert Burns, best known as Derinho is a Brazilian mixed martial artist currently signed to the Ultimate Fighting Championship and fights in the welterweight division. He is also a three-time Brazilian Jiu-Jitsu world champion.

Gilbert Burns was born on 20th July 1986, in Niteroi, Rio de Janeiro, Brazil. His birth sign is. Regarding his nationality, Burns is a Brazilian.

Presently, Burns is signed to UFC which is also his major source of earning. His UFC career disclosed earnings is recorded at $939,200. Though he has not revealed his salary and net worth, looking at his successful career, his net worth is assumed to be in a six-digit figure.

Gilbert Burns is a happily married man. He exchanged the wedding vows with his girlfriend, Bruna Burns on 10th August 2012. The couple together is blessed with two boys named Pedro Benaiah Burns and Joshua Burns. His spouse is BJJ Black Belt National Champ 2012 and is a Kids BJJ Professor at @combatclub Burns Bjj. 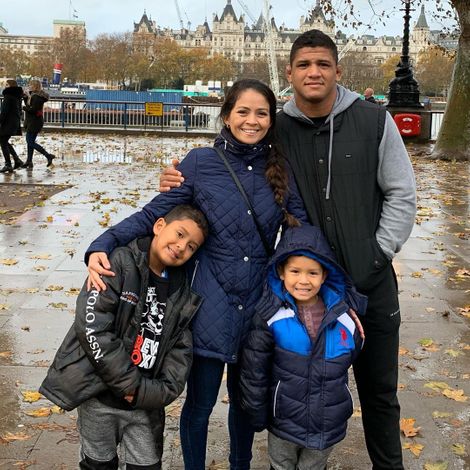 He often shares pictures of himself and with his spouse and their two sons on Instagram. His wife Bruna supports him alot and also trains with him.

He began jiu-jitsu training at his 12, at the Academia Associacao Oriente and later trained with Nova Uniao until the 2007 World Championship, where he reserved the second position. Further, he garnered his career with World Jiu-Jitsu Championship’s silver medal in 2009. The following year, he became recognized when he kissed the World Cup defeating Claudio Mattos.

In 2011, he gained national attention when he won the gold medal in the “World Brazilian Jiu-Jitsu Championship”.

Burn made his professional MMA debut on 28th January 2012 at CFC – Crown Fighting Championship 5. Burns was selected by UFC fighter Vitor Belfort to be the head grappling coach for his team on the first season of The Ultimate Fighter: Brazil in the year 2012.

On 26th July 2014, Burns made his UFC debut at UFC on Fox: Lawler vs. Brown against Andreas Stahl. He recorded his success in his first UFC fight in the third round via unanimous decision. He next faced Christos Gaigos at UFC 179. He won the fight via armbar submission in the 1st round.

His third UFC match came on 21st March 2015, at UFC Fight Night: Maia vs. LaFlare where he won the fight in the third round through armbar.

In his sixth UFC fight, Burn faced Michel Prazeres at UFC Fight Night: Cyborg vs. Lansberg on 24th September 2016. He lost the fights via unanimous decision in the second round. He returned to UFC almost after 1 year at UFC Fight Night: Rockhold vs. Branch, on 16th September 2017. He won the fight against Jason Saggo via KO punches in the second round.

On 14th April 2018, Burns faced Dan Moret at UFC on Fox: Poirier vs. Gaothje. He won the fight, in the second round via Ko punches. He then lost to Dan Hooker and won five consecutive fights against Olivier Aubin-Mercier, Mike Davis, Alexey Kunchenko, Gunnar Nelson, and Demian Maia.