Raised in Montreal, Quebec, Canada, he was interested in martial arts from a very young age and practiced Judo, Brazilian Jiu-Jitsu, and Taekwondo. He started professionally participating in MMA in 2011 and so far has appeared in 14 events with total 11 wins and 3 losses.

On being asked about when and how did get involved into MMA, he in his UFC players profile stated:

"I saw the first fight between GSP and Matt Hughes when I was learning English in Victoria. I was 17 at that time and I have been a fan of MMA since that day. I started training three or four years ago, when I wasn’t sure if I was joining the judo national team that year."

In regards to his educational background, he attended and acquired CEGEP for two years, where he studied Multimedia. He holds Canadian nationality and currently in contract with UFC. As per his ethnic backgrounds, he is white. On the date of the news published, he has 14.1k followers in Twitter and 21.1k followers in Instagram.

The Canadian MMA player began his professional career in a match with Ringside MMA 12, where he fought against Guy Poulin and Win the match held on 21-Oct-11 via Submission (rear-naked choke) in round 1.

Correspondingly, he at Ringside MMA 13 fought against Daniel Ireland, won the match held on 17-Mar-12 via Submission (rear-naked choke) in round 1. 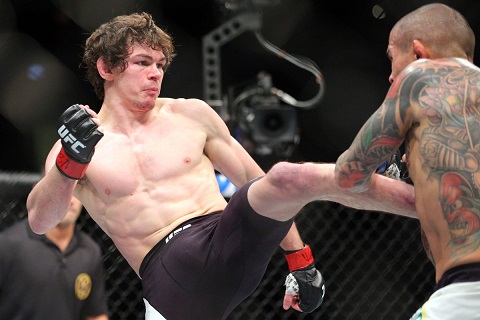 On 16-Apr-14, he fought against Chad Laprise at The Ultimate Fighter Nations Finale: Bisping vs. Kennedy and lost the match via Decision (split) in round 3. In the following event, with UFC Fight Night: MacDonald vs. Saffiedine he, fought against Jake Lindsey, won the match held on 4-Oct-14 via Submission (inverted triangle kimura) in round 2.

He is currently married to his former girlfriend and current wife Marijo Osteopath. The married couple is living together in their Montreal, Quebec, Canada based home.

Besides, there is no information regarding his past affairs and relationship.

Talking about Olivier Aubin-Mercier salary, he is estimated to have earned around $343,000 from his entire MMA career, and his last fight was against Alexander Hernandez. Moreover, his net worth is reported to be over a million dollars.

As per many tabloids, his current net worth is reportedly unknown, but his main source of income still remains his career as a fighter.

Didn't make the Forbes list this year. If I had fought Mayweather, I would have surpassed Conor to take 4th place. Something came up however... Ah well, still under 30. #forbes #forbeslist #canadiangangster #conormcgregor # #ufc #floydmayweather

The MMA player considers RNC as his best submission technique. Moreover, he is also a great standup Boxer. 5 feet and 9 inches tall wrestler weighs 155lb (70kg). The MMA player has got a black belt in judo, brown belt in BJJ, and blue belt in Taekwondo.