Katlyn Chookagian is an American mixed martial artist who currently competes in the flyweight division at the Ultimate Fighting Championship (UFC). She is ranked #2 in official UFC women's flyweight rankings, as of April 16, 2019. She has had a dominant career with a record of 11 wins and 2 losses.

As of February 10, 2020, Chookagian is ranked No 2 position in the UFC women's flyweight rankings and No. 11 in UFC women's pound-for-pound rankings.

Katlyn Chookagian Salary and Net Worth

Katlyn Chookagian is one of the dominant fighters of UFC. She has fought nine UFC matches and has a record of 6 wins and 3 loss at UFC. She has made $384,500 to fight earnings through her UFC fight. As of 2020, her net worth is estimated at over $0.5 million.

Besides her MMA career, she earns much from her sponsorship deals: beam and Eat Clean Bro.

Personal Life of Katlyn Chookagian; Who is her Boyfriend?

Katlyn Chookagian is married to Kyle Cermaria. The couple tied the knot in September 2019. Just as Chookagian is an MMA fighter, her boyfriend-turned-husband is also in a similar career field. He is a wrestling coach at Long Island. He was also a US Open and Pan American RUnner Up-NCAA Division 1 All-American. 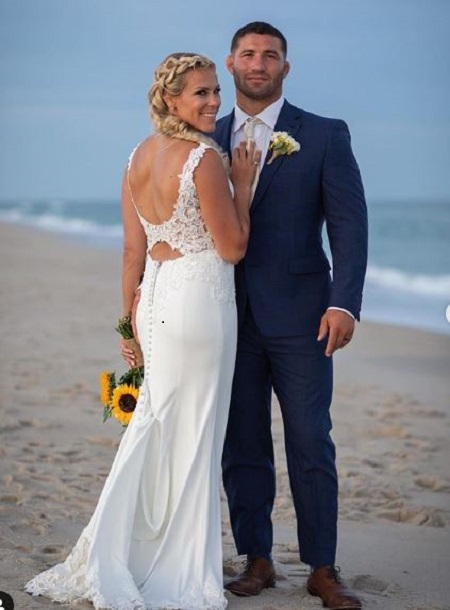 She lives happily with her boyfriend but the topic of marriage does not look to appear on their relationship anytime soon.

Katlyn Chookagian was born on December 28, 1988, in Quakertown, Pennsylvania. She started training karate at the age of four. She graduated from Quakertown Community Senior High School.

Chookagian completed her higher education from Fairleigh Dickinson University with a bachelor's degree in Business Management. Her amateur career in MMA began in 2010. She has trained with UFC fighters like Edson Barboza, Marlon Moraes, Sijara Eubanks, and Frankie Edgar.

Katlyn Chookagian made her professional debut in 2014. On her career debut at CFFC 37, she managed to defeat Rebecca Heintzman via unanimous decision. Her second fight was against the Brigitte Narcisse. She won the fight by knockout against the fighter of 44 years.

Katlyn Chookagian fought against opponents like Linn Wennergren, Melinda Fábián, Sijara Eubanks, Isabelly Varela, and Stephanie Bragayrac and remained undefeated before signing with UFC. On July 13, 2016, she made her debut at UFC Night: McDonald vs. Lineker facing Lauren Murphy as her opponent. Chookagian was declared the victor of the fight with a unanimous decision.

Chookagian had 8 straight winning streaks since the start of her professional debut. It was put to an end by Liz Carmouche at UFC 205 when she lost the fight to her via split decision. She bounced back from her loss by winning her next fight against Irene Aldana at UFC 210 on April 8, 2017. She came out the victor of the fight with a split decision.

For her next two fights, Chookagian faced Mara Romero Borella at UFC on Fox: Jacare Vs Brunson and Alexis Davis at UFC on FOX 30. She won both the fight via unanimous decision and with the win has a three-win streak.

At UFC 247, Chookagian faced Valentina Shevchenko for the UFC Flyweight Champion, however, she lost the bout via technical knockout in round three.