Stephen Curry is an American professional basketball player playing for the Golden State Warriors in NBA league. Besides his own identity, he is also known as the son of the former NBA player Dell Curry. Stephen Curry plays from the position of the point guard.

He has been active in professional basketball play since 2009 as the 7th overall pick in the NBA draft by the Golden State Warriors. Within this short period of his debut, he has won NBA Three-Point Shootout Champion, NBA Skills Challenge Champion, NBA All-Rookie First Team, NBA Sportsmanship Award, two times NBA All-Star, etc.

Stephen Curry, also regarded as the greatest shooter in NBA history, has an estimated net worth of $90 million as of 2019 and earns around $37 million as his annual salary.

Stephen Curry got married to his longtime girlfriend Ayesha Alexander on 30 July 2011. After seven months of their engagement, the couple tied the knot in a beautiful wedding ceremony in North Carolina. The couple got married at the same church where they first met during vacation Bible school. 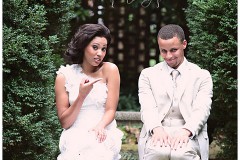 Stephen Curry and Ayesha Curry on their wedding SOURCE: goldenstateofmind.com

Curry was dressed in a smoke-gray tuxedo with black piping on top of a black vest and a silver tie while Ayesha wore a white gown.

The couple asked their guests to make a donation to ThanksUSA instead of the gifts. ThanksUSA is a non-profit organization that provides college scholarships for the children of the men and women of the United States armed forces. Stephen is their national spokesperson.

Who is Ayesha Curry?

A native of Toronto, Aayesha Curry is a Canadian-American actress, celebrity cook, cookbook author, and television personality. She is a mix of African-Polish-American-Chinese-Jamaican descent. 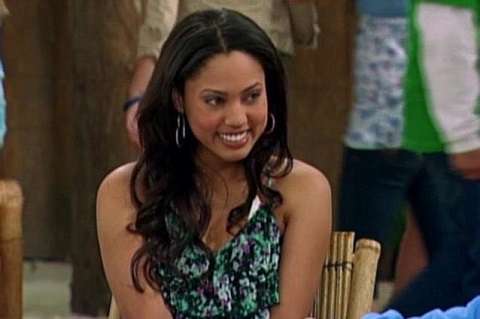 How did Stephen and Ayesha Meet?

Stephen and Ayesha first met each other in a church youth group in Charlotte, North Carolina when they were 15 and 14. However, they did not start their relationship right away.

"He was the cute boy at church that all of the girls were obsessed with, so I made a generalization that maybe he wasn’t for me,"

They met for the second time in Los Angeles when he was in LA for ESPYs ceremony where Ayesha was pursuing her acting career. He searched her on Facebook and decided to meet her. They had their first dating on Hollywood Boulevard. 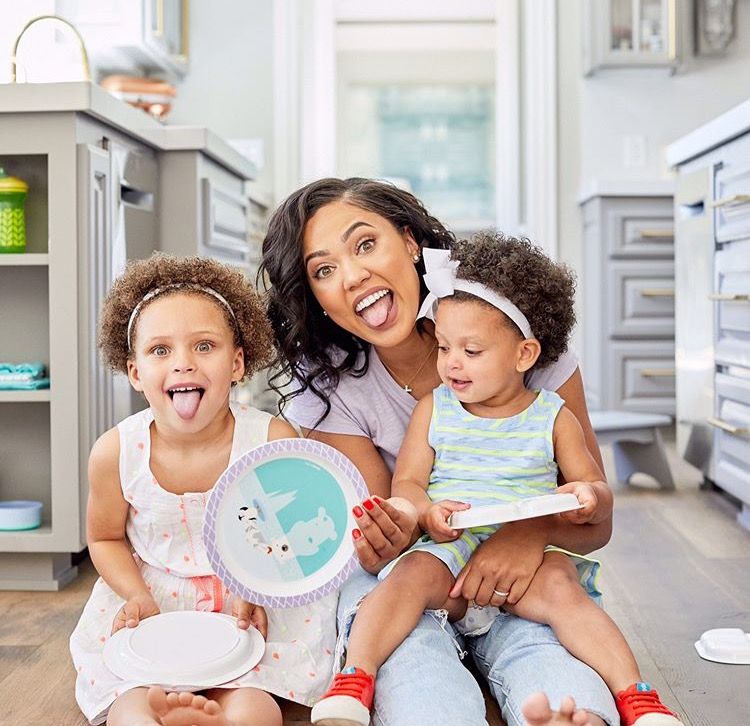 They started dating each other after Steph joined college and Ayesha was an aspiring actress in Los Angeles.  Ayesha initially had no plan of dating an athlete as she thought that they were so arrogant.

Steph returned back to Charlotte but the couple got connected constantly.

The couple together has three children; two daughters named Riley Curry born on 19 July 2012, and Ryan Carson Curry. He became the father of the third child in July 2018 after the birth of his son Canon. 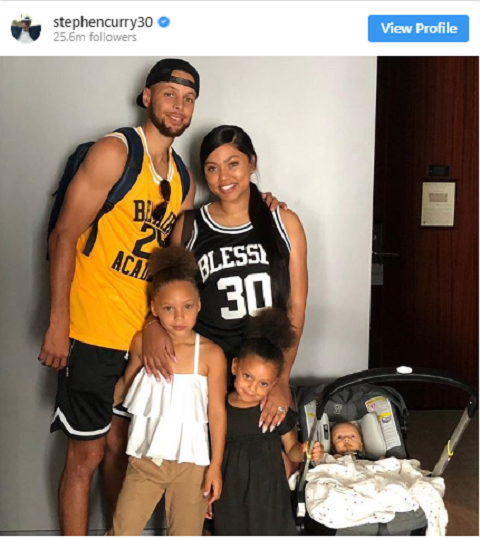 He loves his wife and daughter very much. He loves to spend his time with them.

Besides, Stephen Curry is also involved in charity works. He and his wife founded the Ayesha and Stephen Curry Foundation and back in late 2018 Curry donated $25,000 through his Foundation to the Web.com Tour member Scott Harrington and his wife, Jenn who has been diagnosed with cancer for the second time in May.

Stephen has a growing fan base and is popular among Basketball lovers. His biography, career statistics, and much other information can be gathered from different online sites including Wikipedia, NBA.com, etc. Stephen can be followed on his Twitter account.

In 2017, he agreed to a five years contract, $201 million contract extension with the club. It was the league’s richest contract at the time.

Curry earned $76.9 million in 2019 including $42 million off-court earnings including his endorsements include brands like Under Armour, Vivo, Nissan/Infiniti. He made $15 million alone from the deal with Under Armour.

He was placed 8th in the list of highest-paid athletes with LeBron- the only NBA player ahead of him with $85,5 million earnings. Further, he is ranked #1 Highest Paid NBA Players By Salaries.

Also popular as "Baby Faced Assassin", Steph will be earning $40 million in salary in 2019. In addition, he will reportedly receive around $50 million from his endorsement deals including alone around $20 million from Under Armour.

What Endorsement Deals does Stephen Curry have?

Apart from his Career earnings, Curry had the NBA's best-selling jersey for each of the past two seasons. He earns more than $12 million per year off the court excluding the endorsement deals.

He made $35 million in endorsements in 2017 with the deals with Under Armour, JPMorgan Chase, Brita, Vivo, and PressPlay. Curry is also the global brand ambassador for Nissan's Infiniti line.

Blessed for the next chapter! @underarmour! #Curry6

Curry was also offered an endorsement deal by Nike in 2013 which reportedly was $1.5 million less than what Under Armour have offered him. He turned down the deal to be with Under Armour.

What are Steph Curry's other Business Ventures?

Besides, Curry is also an investor and owns a small stake in Pinterest. He has also partnered with Bryant Barr, a former teammate at Davidson College, and started a marketing startup called Slyce. Curry has made a huge investment in the company.

Moreover, Curry has even funded in CoachUp, which connects student-athletes across the country with high-quality trainers for one-on-one training.

Stephen owns eight luxury cars which include high-value brands such as Mercedes and Porsche. Some of his cars are, Mercedes G55, Range Rover, Porsche GT3 SR model and Panamera which makes his collection incredible. 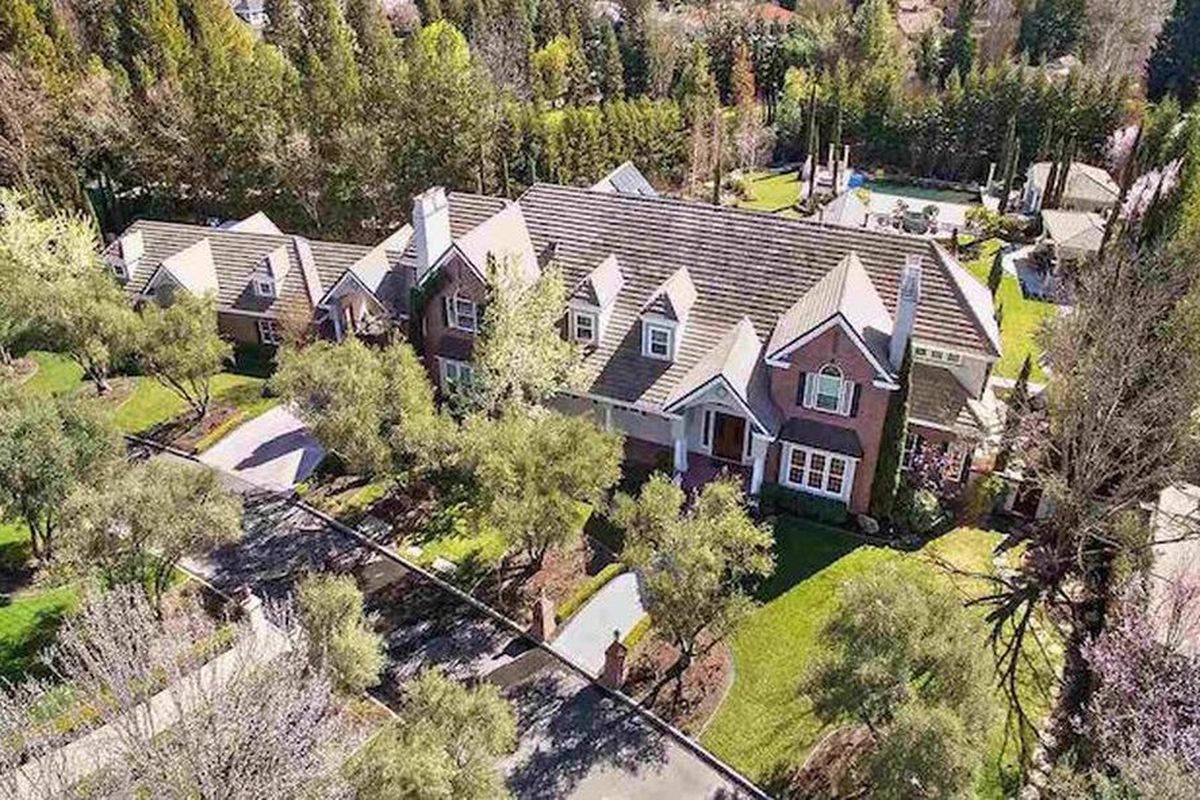 Talking of Curry's house, it has 5 bedrooms and 6 car garages, with an additional guest house and a sauna. This house is located in Alamo, California with manicured gardens and pools. The house is estimated to be worth around $5.7 million.

Stephen Curry was born as Wardell Stephen Curry II on 14 March 1988, in Akron, Ohio, the United States to parents Dell Curry and Sonya Curry. He was raised in Charlotte, North Carolina and also has one younger brother Seth Curry and a younger sister Sydel.

Steph grew up watching his father play. His father Dell Curry is a former basketball player who played for the Charlotte Hornets. His mother Sonya played college volleyball at Virginia Tech in the late 1980s.

During his childhood, he used to go with his father for warm-ups along with his brother. His brother Seth is also a basketball player who plays in the NBA for Portland Trail Blazers.

Stephen Curry attended Montessori School which was started by his mother. While his father was playing for Toronto Raptors, his family lived in Toronto where he attended at Queensway Christian College. There he was in the grade 7 and 8 boy’s basketball team leading to an undefeated season.

He went Charlotte Christian during his high school and contributed his team to lead to the three state playoff appearances and three conference titles. Later, he accepted the scholarship offer from Davidson and played in the NCAA Tournament game.

Stephen Curry was picked 7th overall in the 2009 NBA Draft by Golden State Warriors. Since his first season, Stephen quickly established himself performing best in the games. He caught the limelight soon in his rookie season where he appeared in 80 matches and averaged 17.5 points, 4.5 rebounds, 5.9 assists, and 1.90 steals in 36.2 minutes.

He finished second in the rookie votings and was included in the All-Rookie First team.

In 2012, he signed a four-year, $44 million contract extension with the Warriors.  Steph appeared in 78 games averaging 22.9 points and also set the NBA record for the most 3-pointers made in a season previously set by Ray Allen.

Stephen Curry played 78 matches in 2013 season where he averaged 24.0 points (seventh in the NBA) and 8.5 assists (fifth) to go with 4.3 rebounds and 1.63 steals- setting the Warriors new record of highest 24 average points and 8 assists. He also led the league in the highest 3-pointers made in a season with 261. He was honored with the All-NBA Second Team selection and also made his appearance in the All-Star match.

Stephen Curry and Golden State Warriors came to the right path since the appointment of the former basketball star Steve Kerr as their head coach in 2014. Curry was the highest voted player in the All-Star Game and also won the three-point contest on All-Star.

He averaged 23.8 points, 7.7 assists and 2 steals per game in 2014 season and also was voted the NBA Most Valuable Player. Warriors won 67 matches in the regular season meeting Houston Rockets in the Conference Finals. Curry won the first NBA title of his career defeating Cleveland Cavalier in the NBA finals.

In 2015, Curry became the first player since Michael Jordan in 1989–90 to score 118 points in the first three games of a season. He also surpassed Kyle Korver's mark of 127 straight games with a three-pointer. He recorded 5.4 rebounds, 6.7 assists, 1.8 steals, 30.1 points and was chosen the unanimous MVP. Warriors, with the impressive performance from Curry, led the finals with 3-1 but went on to lose the series by 4-3 against Cavaliers.

Stephen Curry recorded 4.5 rebounds, 6.6 assists, 1.8 steals, 25.3 points in 2016 and led the Warriors to third consecutive Conference finals. He continued his impressive performance in the finals and helped the team defeat Cavaliers to win the second title in last three years.

In 2017, Curry signed a five-year, $201 million extension- making him the highest paid player with the richest contract in NBA. He missed most of the regular season games due to injury. He returned for the injury in Conference finals against Rockets and helped the team reach the finals for the fourth straight season.

Curry inspired Warriors on their win over Cavaliers in the NBA finals and won the third NBA title in the 4 years. He was also expected to win the first Finals MVP but was given to his teammate Kevin Durant. Many people thought that Curry deserved the title. He later responded to the claims and stated:

"At the end of the day, I'm not going to let a [Finals] MVP trophy define my career. Three titles ... Wherever that puts us in the conversation in the history of the NBA ... I'm a three-time champ."

Sports Illustrated claimed Curry as the initiator of the Warriors' golden days and argued that "the Golden State dynasty started with Stephen Curry.

Curry has appeared in 34 matches this season averaging 29.8 points, 5.2 rebounds, 5.4 assists, and 1.2 steals and is among the favorites to win the MVP this season. He also leads the list of the guard's voting in the Western Conference.