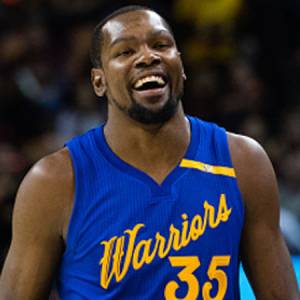 Kevin Durant is an American professional basketball player who currently plays for the Golden State Warriors of the National Basketball Association NBA.

Kevin Durant was born as Kevin Wayne Durant on 29 September 1998. He was born to Wanda Durant and Wayne Pratt Durant in Washington D.C, along with his brothers Tony and Rayvonne and a sister Brianna Pratt.

His parents divorced and he was raised by his grandmother Barbara Devis. He was unusually tall from a young age and reached 6 ft 0 at the age of 13.

Kevin Durant began his professional basketball career since 2007 after he was picked in the 2007 NBA draft by the Seattle SuperSonics. He registered 18 points, 5 rebounds, and 3 steals against the Denver Nuggets. He made his first game-winning shot of his career in a game against the Atlanta Hawks on 16 September 2007. He was named the "NBA Rookie of the Year" with an average of 20.3 points, 4.4 rebounds, and 2.4 assists per game at the end of the season and became the only player to average minimum 20 points per game beside Carmelo Anthony and LeBron James.

During his first game with the club, he set a Rookie Challenge record with 46 points. He ended the year raising his scoring average by five points from the prior season to 25.3 points per game and was considered a strong candidate for the "Most Improved Player Award", eventually finishing third in the voting.

Durant was selected to his first NBA All-Star Game. He further signed a five-year contract extension with the club in 2011. He led the NBA in scoring, averaging 27.7 points a game and with the help of this the Thunders won 55 games and earned the fourth seed in the Western Conference.

He recorded his first career 50-point game, scoring 51 points against the Denver Nuggets. He was awarded the "NBA All-Star Game Most Valuable Player Award" for scoring 36 points in the game.

Kevin Durant further signed with the Golden State Warriors on July 4, 2016, on a two-year contract with the club. He made his debut for the Warriors in their season opener against the San Antonio Spurs on 25 October 2016, when he recorded a team-high 27 points and 10 rebounds in a 129–100 loss.

He matched his career high with seven three-pointers against his former team, Thunder on 3 November 2016. He set a new season high with 40 points in a 121–100 win over the Thunders on 18 January 2017 and was named the Co-Western Conference Player of the Month for January alongside Stephen Curry. He was the winner of the Bill Russell NBA Finals Most Valuable Player Award in 2016. He re-signed with the Warriors on 25 July 2017.

Some of the members of his NBA team are Stephen Curry, Klay Thompson, Nick Young etc.

Kevin Durant received an invitation to the United States National Team training camp in February 2007 but was unfortunately dropped out of the team after training. He was finally selected to the national team at the 2010 FIBA World Championship. He became their captain as other All-Stars were unavailable and led his nation to their first FIBA World Championship since 1994.

He did not appear in 2014 FIBA World Championship mentioning his personal problem and returned back to the Team ahead of 2016 Olympics. He helped his team win the gold medal and was also named the 2016 co-USA Basketball Male Athlete of the Year along with another teammate Carmelo Anthony.

Kevin Durant is currently dating Jasmine Shine. The couple began dating each other in 2014, and it seems they are going stronger. His partner Jasmine Shine is an American model. Their relationship has always been on and off and seems to be still together,

Recently, in 2017, he was also rumored to be dating Golden State Warriors reporter Rosalyn Gold-Onwude. He was also linked with Ashley Champ, an American model, in February 2016. Moreover, Durant had an affair with R&B singer, actor, and model Crystal Renee from late 2014 to 2016.

Besides, his other girlfriends were Monica Wright, Chantel Jeffries etc.

Kevin Durant has an estimated net worth of $100 million in 2017, including all of his properties and incomes. As of 2017, he is receiving an annual salary of $26.5 million dollars from his present club.

Apart from his earnings from basketball he too earns massive amounts through his several endorsing brands. He is linked with brands like Nike, Beats, American Family Insurance, BBVA, Sparkling Ice, Panini and NBA 2K.

Durant currently resides in a huge mansion located in Los Angeles. He also owned a house in Oakland previously. He had bought the house for $1.95 million in 2013 but sold for $925,000 after two years. The same time, he sold his one more mansion in the same area. Bought for $3 million, the mansion was later sold for $1.5 million.

Kevin Durant has several cars in his collection. Some of the very expensive are Ferrari, Mercedes, Range Rover, Chevrolet etc.

Zheng Haixia 1967 - Zheng Haixia Salary and Earnings as a Coach in China; Her WNBA Stats, Career, Personal Life, Family, and Girlfriend
Biography
Ron Guidry How much retired MLB Ron Guidry earned from his 14-year long career? How much is his net worth in 2020?
Biography