Ray Allen is a professional American Basketball player who is currently a free agent. He is also known with the nicknames Sugar and Ray. He had played representing Seattle SuperSonics, Milwaukee Bucks, Boston Celtics and Miami Heat in the NBA league.

He is known as the most accurate three-point and free-throw shooter in NBA history. He is the NBA’s all-time leader in three-point field goals in the regular season as well as in the postseason. He is known for his quick release which is his trademark. He has outstanding career statistics in the NBA which is proved by the achievement of the different awards and achievements. He is the ten times NBA All-Star, NBA Sportsmanship Award, NBA Three-Point Shootout Champion, two times NBA Champion, etc.

Six feet five inches tall in height, 42 years aged athlete Ray Allen is a married man. He is married to his girlfriend Shannon Walker Williams with whom he had been dating since 2006. He was married to his wife on 16 August 2008. The couple together has five children, four sons, and a daughter.

He loves his children and wife very much. He loves to spend his time with them. There are no issues and conflicts in the relationship so we can confirm that they are unlikely to get divorced in recent times. 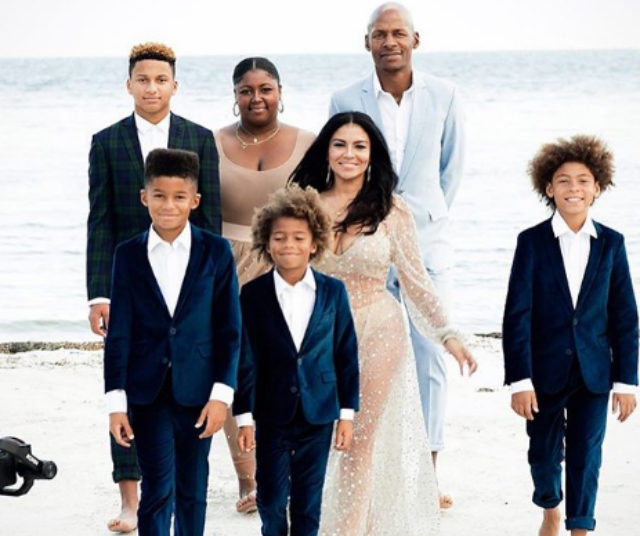 Ray Allen with his wife and children SOURCE: BCK Online

Besides seeing him on the court, he can be seen in the movies as well. He had co-starred in the movie “He Got Game” alongside Denzel Washington and also had appeared in the 2001 movie Harvard Man as Marcus Blake.

He is also a member of the Air Jordan brand and has served as NBA Spokesman for the Jr. NBA/ Jr. WNBA program. He is also the founder of the “Ray of Hope” Foundation which assists charities in several communities.

Ray Allen was born as Walter Ray Allen Jr. on 20 July 1975, in Castle Air Force Base, Merced, California, the United States to parents Walter Sr. and Flora Allen.  He spent most of his childhood growing up in the Edwards Air Force Base. He had attended his high school in Dalzell, South Carolina, and also Hillcrest High School.

Ray Allen's Net Worth and Endorsements

As of 2018, Ray Allen has an estimated net worth of $100 million including all of his properties and earnings. He used to receive an annual yearly salary is $10 million from his club. Allen's net worth is $40 more compared to fellow NBA star, Stephen Curry. In preceding years Allen grossed as high as $19 million each year. Overall, he has grossed around $180 million in the form of salary alone throughout his span of 15 years in the NBA.

Apart from his earning from NBA, he too is linked with brands like Nike Webster bank and JordanRay Allen is active on Twitter and can be followed in his Twitter account to get updated with his recent updates. More of his information can be gathered going through several of the online sites like Wikipedia, IMDb, etc that locate his biography, career statistics, and other information on him.

Allen was drafted in the 1996 NBA Draft as the fifth overall pick by the Minnesota Timberwolves. Soon after his selection, Minnesota Timberwolves traded him with Milwaukee Bucks where he spent 7 years of his career. With learning and growing in experiences, he had contributed to the success of the team.

He also won several awards due to his performance while with the team. Later in 2003, he joined at Seattle Supersonics. He spent his four years of career with the team. During the 2004 preseason, Allen had a brief war of words with Los Angeles Lakers guard Kobe Bryant. In 2007, Sonics had traded Allen and Glen Davis in the 2007 NBA Draft to the Boston Celtics in the 35th overall pick of the 2007 NBA Draft. He broke the Celtics franchise record in consecutive free throws made previously set by Larry Bird on 22 February 2009.

He spent 5 years of his career with the team. In 2012, he accepted the three year deal with Miami Heat and played for the team until the end of the contract. After that, he stayed as a free agent and announced that he would like to stay out the season and focus on the 2015-2016 season.