Shelden Williams is a well-known American former professional basketball player. He played as a player from 2006 until 2015 in the National Basketball Association and worked as an assistant coach for the College Park Skyhawks. Willaims was named the NABC Defensive Player of the Year in 2005 and 2006.

Shelden Willaims was born Shelden DeMar Willaims on October 21, 1983, in Oklahoma City, Oklahoma. He is the son of Jeannette Williams and her husband, Bob Williams. Much about his parent is still under the radar. Williams is very much private about his parent's career. Shelden graduated from Midwest City High School and enrolled at Duke University. Williams stands six feet and nine inches tall and weighs 113 kg.

Sheldon Williams's Net Worth in Millions

Sheldon Williams has an estimated net worth of more than $5 Million. He credits most of his net worth to his successful career in basketball. Sheldon played in the NBA for six seasons with six different teams. The player earned $2,952,840 as his salary and signing bonus with Atlanta Hawks. Sheldon is living a single happy life as of early 2022. He is famous for his successful career and well-known for his failed married life with Candace Nicole Parker. The love birds walked down their wedding aisle on November 13, 2008, in a private wedding ceremony. Shortly after the wedding, they opened about expecting their first child. In May 2009, Sheldon and Candace welcomed their first child, Lailaa Nicole Williams. 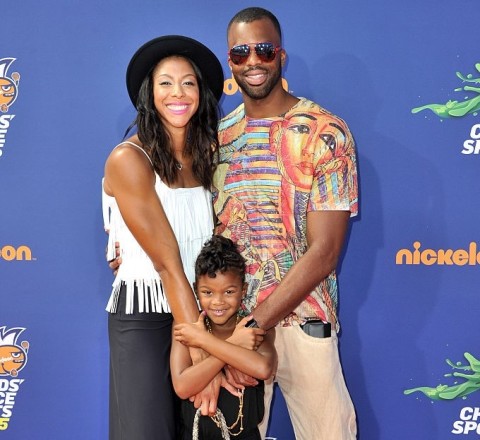 Shelden shares a photo with his former wife and their daughter SOURCE: Getty Images

Candace is also an American professional basketball player for the Chicago Sky of the Women's National Basketball Association. She has been playing in the WNBA since 2008 and has won two gold medals in the Olympic Games for the United States.

This happy-looking relationship ended in 2016 after Sheldon filed for divorce for personal reasons. They had been living separately for 3 months before the divorce. Parker gave him a sum of $400,000 for spousal support instead of paying ongoing payments. Laila spends her time sharing with her parents. Parker married Anna Petrakova in 2019 and is expecting their first child.

Sheldon played basketball for Midwest City High School and enrolled at Duke University. He listed his name for the 2006 NBA draft and was drafted by Atlant Hawks in the round one overall 5th pick. Williams was involved in a multi-player trade to the Sacramento Kings for Mike Bibby. He did not have excellent stats with his game and was traded with several clubs in the next few seasons. Sheldon got to play in the European and Chinese leagues before retiring in 2015.