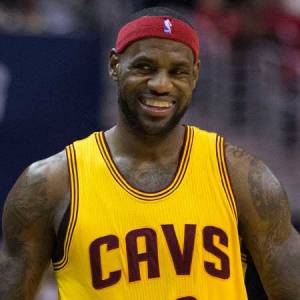 LeBron James is considered as one of the most versatile players in the NBA. Currently, the Small forward / Power forward plays for the Los Angeles Lakers of the National Basketball Association (NBA). He was selected by the Cleveland Cavaliers with 1st overall pick in the round one.

The thirty-three years old has an estimated net worth of $440 million as of 2018. He is married man and has three children together with his wife.

LeBron James was born on December 30, 1984, in Akron, Ohio, United States of America. Regarding his nationality, he is an American and belongs to Afro-American ethnicity.

He was born to Gloria James who raised him on her own. LeBron James attended St. Vincent-St. Mary where he played basketball for his high school team. James is an all-time leading scorer of Cavaliers. He also has been selected to 13 NBA All-Star teams, 12 All-NBA teams, and Six All-Defensive teams.

The Cleveland Cavaliers selected LeBron James as the overall picked of the 2003 NBA draft. Upon starting his season, he scored 25 points against the Sacramento Kings, setting an NBA record for most points scored in his debut performance, at the conclusion of the season; he was named NBA Rookie of the Year.

During the summer of 2004, LeBron James made his Olympic appearance in Athens, as belongs to the U.S Olympic basketball team. He and his team players bronze medal after defeating Lithuania. Furthermore, in the year 2005, he was the youngest player who scored fifty points in one game.

In 2010, LeBron James left the Cavaliers for the Miami Heat. He spent four seasons with Miami, reaching the finals all four years and winning the back-to-back championship in 2012 and 2013. In 2014, he returned to the Cleveland Cavaliers and played for the team until 2018.

In July 2018, He moved to Los Angeles Lakers and joined the team alongside Brandon Ingram, Josh Hart, Johnathan Williams, and Rajon Rondo.

LeBron James is a married man. He tied the knot with his high school sweetheart, Savannah Brinson. After dating many years, on Dec 31, 2011, at the party of New Year Eve’s, he proposed her for marriage. The two wedlock on September 14, 2013, in San Diego.

However, James also dated Carmen Ortega and Hencha Voigt. Besides these, he was also rumored to hook up with Amber Rose and Meagan Good.

James has an estimated net worth around $440 million, mostly earned through his basketball career. For the 2018-19 season, his salary is reported $35.6 million from his present club Los Angeles Lakers.

Besides, he earns much from endorsement deals. He is a popular face of several companies. He endorses for Coca-Cola, Dunkin’s Brands, McDonald’s, NIKE, State Farm, Samsung, and Reebok.

Also, Lebron James is the philanthropist. He raises fund for the Boys & Girls Club of America, Children’s Defense Fund, and ONEXONE. He also establishes his charity foundation named LeBron James Family Foundation. The foundation helps children and fulfills the need and necessities of single-parent families.