Pablo Prigoini is a well-known Argentine-Italian professional basketball former player and a basketball coach. Prigioni has been working as the assistant coach for the National Basketball Association Team, Minnesota Timberwolves. Pablo played in the NBA for five seasons. He played as a Point Guard for his team. Prigioni was part of the 2004 FIBA South American Championship gold medal-winning team.

Pablo Prigioni was born on May 17, 1977, in Rio Tercero, Cordoba. Pablo is the son of Raul Prigioni and his wife, Maria Enciri. Pablo did not come from a reputed family so, and there is not much information about his family and early in the media. Prigioni stands six feet and four inches tall and weighs 84 kg.

Pablo Prigioni's Basketball Career in the NBA and Europe

Pablo started playing basketball in High School. He made his professional career debut with the Ramallo of the Argentine LNB League in the 1995-96 season. After spending a season with the team, Prigioni moved to Belgrano San Nicolas before transferring to Obras Sanitarias in 1998. In 1999, Pablo listed his name for the NBA draft but was undrafted.

In 2009, Pablo moved to Real Madrid. He was part of the team until 2011 and then played for Baskoniafor a season. In 2012, Prigioni signed a one-year contract with the New York Knicks for the rookie minimum. He became the oldest rookie in NBA history. The player resigned from the team in 2013. In 2015, Houston Rockets signed him for a year and then moved to the Los Angeles Clippers. Prigioni spent his last season with Baskonia in the Spanish league and then started working as an assistant coach for the Brooklyn Nets in 2018. In 2019, Minnesota Timberwolves signed him as their new assistant coach.

Who is Pablo Prigioni Married To? Know About His Wife and Children 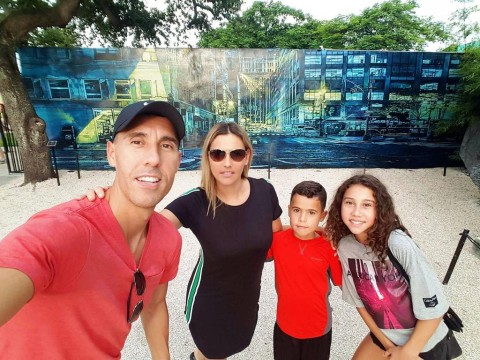 Pablo along with his family at a refreshment SOURCE: [email protected] Prigioni

Pablo and Raquel are the proud parents of two children, daughter Alessandra, and son Nicolas. Unlike other basketball players, Pablo has become successful in keeping his personal life away from the public. In 2013, Raquel requested Pablo to move to Spanish after a season with the Knicks, but he refused and played in the league until 2016.

How Rich is Pablo Prigioni? Know His Net Worth, Earnings, Salary, Contracts

Pablo Prigioni has an estimated net worth of more than $10 Million. Pablo is one of the most successful basketball players in the Spanish league. However, Prigioni has not shared a word about his earning and salary from playing in the Spanish League.

Pablo earned more than $3 Million while playing in the NBA for almost four seasons. He earned $1 Million playing with the Knicks and acquired the remaining amount from his contracts with the Rockets and the Clippers.  Sine 2018, Prigioni started working as the assistant coach in the NBA.