What did Conor McGregor say Dillon Danis after his second MMA win? 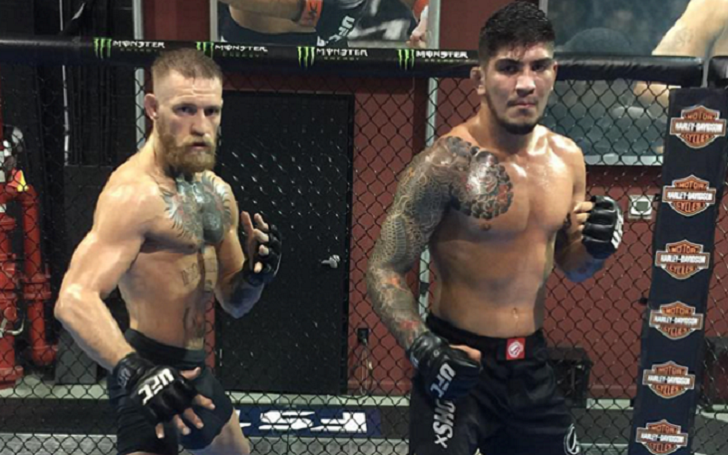 Dillon Danis defeated Max Humphrey at Bellator 222 to pick up his second mixed martial arts win on June 14. He submitted Humprey in the first round to extend his record to two submission wins as he defeated Kyle Walker at Bellator 198 the same way.

The nine-time BJJ champion, after his win, revealed that he suffered a torn LCL prior to competing which was later confirmed by his coach John Kavanagh on Ariel Helwani’s MMA Show.

“Yeah, it happened a week out. Weirdly, a common story, the last round of his last spar. In fact, it was the last few seconds of the round. And, he went for – actually he went for the same technique he won his fight with, but he got caught in kind of a funny angle and he heard a tear. He went and got assessed and it turned out he had a tear of his LCL.”

He was very much impressed by Danis ground game.

“The takedown came pretty quick. His ground-and-pound style, I don’t think we’ve really seen that before. He’s only had one fight. Very dominant takedown, the dominant style of ground-and-pound, good positioning, and then, obviously, good awareness to his corner. I still have to remind myself it’s his second fight ever.”

Danis gained immense popularity as the BJJ coach of the former UFC champion and MMA star Conor McGregor. He was even involved in the aftermatch brawl at UFC 229, where he had a scuffle with the UFC lightweight champion Khabib Nurmagomedov.

The BJJ star also appeared on the show later and expressed his happiness despite having pain.

“Terrible,” Danis said. “So bad. It’s so bad. I’m in excruciating pain for the past three days. It’s been so bad. It feels like I can’t move it, it’s swollen – it feels like someone is stabbing me in the knee over and over again. It’s really bad. But the only reason I’m getting through it is because, with the win, it takes all the pain away. Just hope I can get better soon.”

He also said that Conor texted him to give him some insight into his performance. Conor called his victory an easy work and also praised his standup fight.

“Yeah, I did actually. He messaged me right away. I’m pretty sure he was watching live. He said how much more comfortable I looked on the feet, and stuff like that. He was just like, that’s light work, easy work. So, he was very complimentary towards the performance. He said, this guy has like 30 fights and I don’t have any amateur background and I went in there and made it look easy. And MSG where all my fans were, all my friends, and I went out there laughing basically.”