Gossip Alexander Volkanovski Is Voted As 2022 MMA Fighter of the Year: His Year In the Review

Alexander Volkanovski Is Voted As 2022 MMA Fighter of the Year: His Year In the Review

2022 had been a rollercoaster ride for many sports consumed by the masses. While the fans remain salty about the UFC price hike, the fights under their banner have kept MMA lovers entertained in 2022. While many championship titles changed hands in 2022, Alexander Volkanovski defended his gold successfully. Volkanovski fought in two title defense bouts in 2022 and won by a landslide. It's only natural that he'd win the Fighter of the Year.

Alexander joined the MMA sports at middleweight in his early days. During his amateur days, he fought in many MMA organizations in Asia. After fighting for four years, UFC extended an olive branch to Volkanovski in 2016. The talented fighter owned 13 wins and one loss before joining the Ultimate Fighting Championship. It took three years from his debut in UFC for him to capture a title in the promotion.

The Australian MMA fighter Alexander Volkanovski found his foothold in the UFC in late 2016. And since the start of his career in the Ultimate Fighting Championships, Alexander has remained undefeated. On December 14, 2019, Volkanovski gained a shot at the Featherweight title. 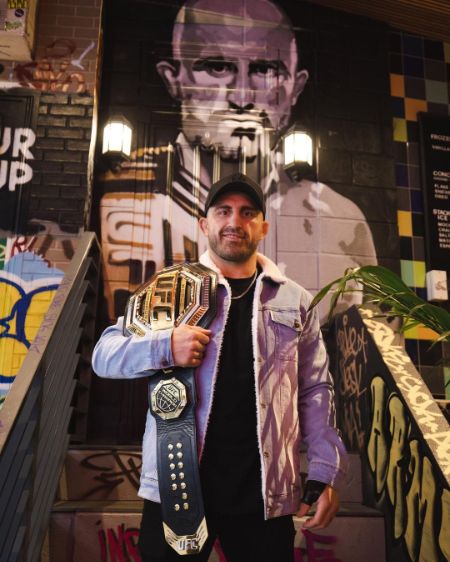 Alexander Volkanovski posted a picture with his title on his shoulder. SOURCE: [email protected]

The coveted Featherweight Championship would change hands on the UFC 245. The Aussie fighter won the title via a unanimous decision. Alexander fought for the complete five rounds against Max Holloway. Volkanovski bagged the match and took the title home.

Max and Alexander would face each other once more in UFC 251. Once more, the Aussie fighter won his bout against Holloway. Later in 2021, Volkanovski defended his title against Brian Ortega. Like his first title match, the defending champion won against Ortega unanimously, earning him the Fight of the Night Award.

Alexander would start his 2022 year with his first TKO victory as the champ. Similarly, he fought two bouts in 2022, defending his gold. Besides his title, Volkanovski also held onto his undefeated record.

Alexander won his first title defense of 2022 in the fourth round!

Alexander Volkanovski faced off against Chan Sung Jung for his first title defense match in 2022. Chan and Alexander fought in the UFC 273 event on April 9, 2022. With a TKO win, the MMA fighter dominated his reign as the Featherweight champion. 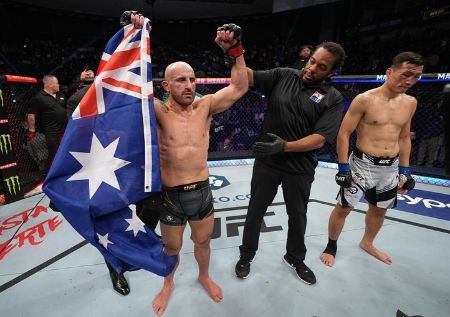 Alexander Volkanovski defeated Chan Sung Jung via a TKO in the fourth round. SOURCE: [email protected]

In the fourth round, 45th second in, Volkanovski landed a brutal punch granting him the opening needed to follow up with a flurry of punches. With that, Alexander earned himself a TKO victory. His fight against Chan earned the defending champion Performance of the Night Award.

Volkanovski faced off against Max Holloway for the third time! 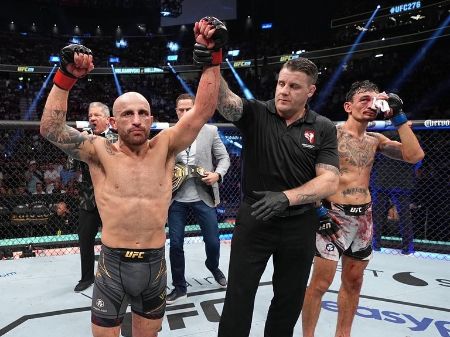 Volkanovski vs. Holloway held the main event card for the UFC 276. Like most of their encounters, Alexander won the bout via unanimous decision. His victory over Max made it Alexander's fourth successful title defense.

Alexander Volkanovski proved he deserved of 2022 MMA Fighter of the Year Award!

Alexander Volkanovski currently holds the Featherweight Championship for over three years. And with his undefeated record, Alexander seeks to move his weight class from featherweight to lightweight. The Aussie MMA fighter owns the No. 1 rank in his featherweight class. 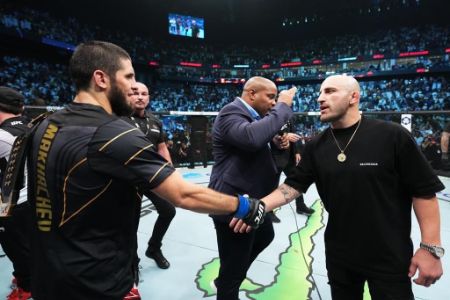 With his impressive stats and ranking, Alexander deserves the MMA Fighter of the Year Award. From his brutal win against Chan Sung Jung and Max Holloway, the defending champion proved he was the best in his weight class. After which, Volkanovski set his sights on the lightweight championship.

Volkanovski's said to face off against the current UFC lightweight champion Islam Makhachev. The bout between Islam and Alexander will take place in UFC 284 with the hiked PPV price. As such, Volkanovski will fight in his first lightweight match on February 12, 2023.

Alexander started his journey as a wrestler!

Before rising to fame as an MMA fighter, Alexander Volkanovski trained in Greco-Roman wrestling. Interestingly, he won the national title twice before hitting teens. However, Alexander lost interest in wrestling by the time he turned fourteen.

Alexander started training in MMA at the age of 22. But before that, Volkanoski played in a semi-pro rugby league. And by 23, the Aussie MMA fighter left rugby to pursue his journey in MMA. In 2012, Alexander fought his debut match under the Revolution Promotions and won his first bout as a professional MMA fighter.

From 2012 to 2022, Alexander fought in 26 bouts. Out of which, the Australian fighter won twenty-five fights. Throughout his career, Volkanovski lost once by a total knockout. After losing his match in the early days, the UFC featherweight champion has kept a clean slate and an undefeated streak.