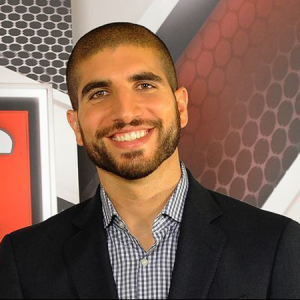 Canadian mixed martial arts journalist Ariel Helwani currently serves as the host of Ariel & The Bad Guy with Chael Sonnen. He also delivers his “the MMA Hour podcast” and reports the MMA on ESPN.

A native of Montreal, Quebec, Canada, Ariel Helwani was born 8th June 1982. Talking about his nationality, Helwani is Canadian and he belongs to white ethnicity. Helwani’s birth sign is Cancer.

Helwani raised in a Jewish family in Mount Royal, Quebec, and Westmount and enrolled at the Akiva School and Herzliah High School. His father is from Egypt whereas his mother is from Lebanon. His maternal uncle is Gad Saad, the evolutionary behavioral scientist.

In 2004, he graduated from Syracuse University’s S.I. Newhouse School of Public Communications in Syracuse, New York.

As host of the podcast “The MMA Hour," Helwani interviewed some of the prominent names in the sports, including Rampage Jackson, Frankie Edgar, and Michael Bisping.

Apart, Helwani served as an “MMA Insider” for Fox Sports 1’s weekly UFC Tonight show and another pre-and post-event programming. Similarly, he has also worked as the co-host of the Sirius XM radio show “Fight Club."

Helwani was controversially banned from attending UFC events after reporting that Brock Lesnar would fight at UFC 200, news which the organization didn’t want to be released at the time. The UFC’s move was broadly criticized, and his ban was revoked. The famous UFC star of the present time is Conor McGregor.

Thirty-five years Ariel Helwani is a married man. He exchanged the wedding vows with his girlfriend Jaclyn Stein Helwani, a jewelry designer. The couple is blessed with three children.

It seems that Helwani is a private person; he prefers to keep private about his personal matter in front of media and public.

Ariel Helwani has earned huge name, fame, and wealth through his professional MMA journalist career. As of 2017, he has an estimated net worth of $5 million. With a tremendous amount of net worth, he is living a lavish and luxurious life.