Dillon Danis is known for his amazing Brazilian Jiu-Jitsu techniques with IBJJF worlds titles at brown belt. He is an American mixed martial artist who is currently signed with Bellator MMA. He is also the jiu-jitsu trainer of the popular MMA star Conor McGregor.

As of 2019, Dillon Danis has an estimated net worth of $1 Million. Dillon Danis’s yearly disclosed earning is reported to be $100,000.

In 2017, he was claimed as the highest-paid fighter in Bellator after he signed a lucrative deal with the promotion. He also received huge money reported to be $100,000 for his debut match. 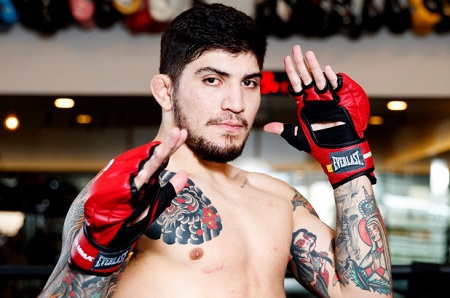 On Instagram, he posted a photo with a Lamborghini which is reported to be his own, bought recently.

As of now, Danis has not talked about his properties and endorsements. He is expected to have earned millions as the grappling coach of The Notorious.

According to reports, Dillon paid Conor's $50,000 bail after his New York arrest.

He was recently charged $7500 fine and 7 months suspension for his involvement in UFC 229 brawl.

At the age, of  15, Danis committed in the field of fighting. As an intern, he used to street fight at his high school. He later developed a keen interest in fighting and trained at the Alliance New York Academy.

Danis got his career break after Ultimate Fighting Championship (UFC) star, Conor McGregor hired him to be his grappling partner in 2016.

On 28th April 2018, Danis made his official Mixed martial arts debut at the Bellator 198 against American fighter, Kyle Walker which he won the bout by submission. He currently trains under Murillo Santana at Unity BJJ.

Danis is 6 ft. tall in height and weighs 79 kg. He is a good friend of a Polish mixed martial artist and former Muay Thai kickboxer, Joanna Jedrzejczyk.

When comes to his personal life, he always stays tight-lipped. He hasn't yet talked about his relationship neither has been seen with a woman who could possibly be his girlfriend.

The wrestler has never discussed publicly the issue of his getting married let alone having a girlfriend.

Dillon Danis has been into controversies quite often. He was attacked by Khabib Nurmagomedov after the UFC 229 fight against Conor McGregor and Danis was also suspended for an uncertain period of time. He has also dissed several UFC fighters like Nate Diaz, Ben Askren, Ali Abdelaziz, etc.

Dillon Danis was born on August 22, 1993, in New Jersey, United States. Regarding his nationality, Danis is an American and belongs to white ethnicity. He grew up with her sibling, Carol, and Brandon, in Parsippany Hills sophomore.

Since graduating from Parsippany Hills, Danis has been training full-time. His mother, Nikki Danis love traveling the world.