Remember Joe Rogan saying: "I wonder what this brawl is going to bring to the streets? It's never over" after UFC 229 brawl right from the cage side. But it looks like Joe was right, as the MMA community is still feeling UFC 229's after Shock. We saw Ali Abdel-Aziz threatened Conor McGregor's life, alongside we saw McGregor's grappling coach Dillon Danis ripping the team Khabib verbally. Where would it end? No one knows but looks like Danis and Abdelaziz are not done yet.

Followed by the suspension, the Nevada State Athletic Commission (NSAC) froze Khabib Nurmagomedov’s $2 million paydays. After that, Mike Russell reported that NSAC is allegedly also holding the $200,000 cut from Khabib Nurmagomedov’s purse that was intended to pay the fighter’s manager Ali Abdelaziz. Hence, Aziz definitely should have a grudge over Conor, but it's a little weird that Aziz has been talking more than anyone else from the team Khabib.

After recent Al Iaquinta Kevin Lee rematch, Khabib cautioned Lee to stay humble but before Lee could respond to it, Danis' won the fastest finger first and typed the reply and rolled it over to Khabib.

Criticized by many for jumping off the cage after the fight, Khabib's tweet Lee might have been a hard pill to swallow for the world's top prize fighter's grappling coach, or else why would he mock the eagle?

Here is what Dillon Danis replied,

shut your mouth nobody cares. https://t.co/XwO5A6bb9s

Danis should be surprised to see the number of followers on Khabib's twitter, which proves that people care for the current Lightweight champion's opinion which might be the reason that Khabib didn't bother to engage in internet bullying against his former opponent's coach but you know who cuts in afterward? It's nonother than Edgar-Nurmagomedov and many other high-profile MMA fighter's infamous managers Ali Abdelaziz.

As Khabib has made him the most money, it's his duty to protect his fighter's pride, or maybe he is still angry about his purse being held by the athletic commission, or maybe he is enjoying the attention he is getting now and is promoting the shit out of his business, whatever be the reason, Aziz cuts in to silence Danis and tweets:

So what does he mean? Will there ever be a team Vs. Team match, or does Aziz have a fighter ready for Dillon Danis? As UFC has successfully executed its Moscow show, Conor Vs. Khabib in Russia can be a real possibility and these are nothing but options. But Danis isn't a guy who would wait till the possibility becomes an opportunity, he immediately challenged Aziz for a fight highlighting his Pro-MMA career which so far has 0 wins and three losses.

It's funny, what these two are trying to do while Khabib is busy with his newly married wife and Conor is selling the shit out of his Whiskey, these two seem to be going back and forth like they are about to fight whenever they see each other on the streets.

By the way, here is what Kevin Lee had to say on Khabib's Humble tweet: 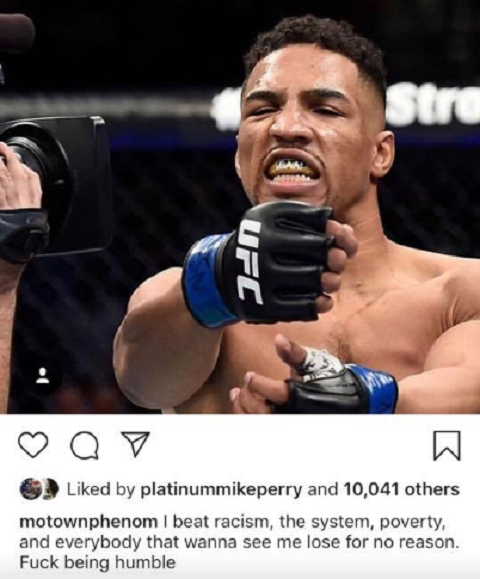