Jose Aldo hits back at Conor McGregor and Max Holloway after UFC Fortaleza Win; Wants to Fight Conor Next 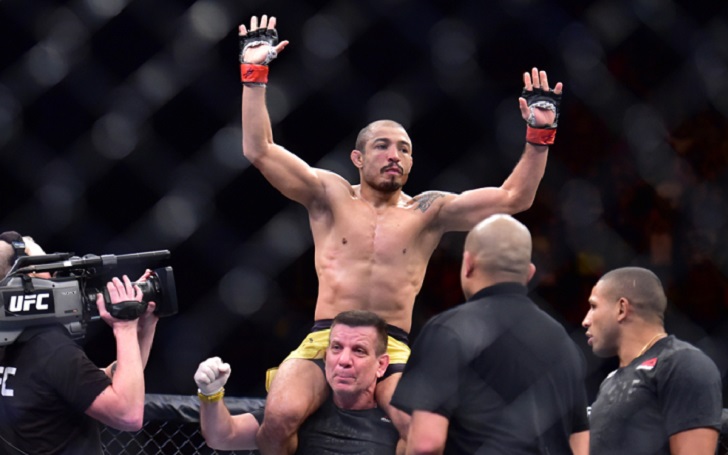 If Conor McGregor fights every single person who has called/desired to fight him, he would be the busiest man- not only in the UFC or MMA but in the whole world.

Jose Aldo had a spectacular win against Renato Moicano in the co-main event of UFC Fortaleza via TKO in the 2nd round with a volley of second-round punches. Several featherweights and former 145-pound UFC stars including Conor McGregor, Max Holloway, and Alexander Volkanovski took time to react on his win following the match.

Aldo responded every single comment at Saturday’s post-fight press conference and also expressed his desire to fight a rematch against Conor.

The Notorious, who appeared in the event to watch the fight, tweeted with a claim to fight Aldo in Brazil.

What an amazing atmosphere at UFC Brazil tonight.
I would LOVE to compete there for all the passionate Brazilian fans at some stage of my career.
I was so close to securing a bout in Rio last year. It was essentially a done deal.
Maybe next time.
Ui Vai Morrer!!!! I’m still here.

“To me, it would be great. I don’t know if this fight he said [would be] in Rio, it didn’t get to me, but if I have that opportunity at the division above, that way I don’t have to suffer through the weight cut, I think it would be a great fight."

"I think in the first fight we weren’t able to show my work. He connected with a great punch, but if you have another opportunity, I think the story’s going to be different.”

“Of course. Anyone here who is well-ranked would be a great fight. I put about 15 names in front of Dana (White) and asked him what was the real situation, … so I gave him a list of names and all those in that list, I’d like to face them someday.”

Aldo also went on to reply Volkanovski, who made a tweet asking if he was interested to fight.

“Sorry, “Sorry to that guy. I don’t know, you can be sure that if you want to fight in Curitiba if I have the opportunity, I’m in.”

Junior Mac finally responded to a congratulation message from the reigning featherweight champion Max Holloway who he has lost twice.

Max congratulated Aldo for a win and also described him as the King of Brazil.

Not just king of Rio. King of Brazil. King of defending champs. Congrats Ze Aldo. Nothing but love for you my bratha https://t.co/6ijEjBnzvn

“I think he’s a true champion. I’m happy about it because he deserves to be there, he deserves to be the champion. He achieved it, he’s battled from the beginning. He came into the UFC very young and I think that he conquered that. I have a lot of respect for him. He’s got a great story. He’s got a kid too, just like me, I have my family. So we defend that and I’m very happy and I wish him all the best at featherweight or at lightweight. I hope that he continues with his victorious path, always healthy.”

Is there any possibility of Conor-Aldo II?

Kobe Bryant and daughter Gianna “Gigi” Bryant Died in a helicopter Crash; Everything you need to know about Gigi 4 hours by Jack Ol