South El Monte, California native, Joseph Diaz was born on 23rd November 1992, under the star sign Sagittarius. The twenty-eight years old holds an American nationality and is of Mexican descent. He stands     5 ft 6 in (168 cm). Growing up, he played baseball but took up boxing to learn self-defense, coached by his father, He is a graduate of South El Monte High School.

In 2012, Diaz made his professional debut against Vincent Alfaro. He won the fight via unanimous decision over four rounds and also scored a knockdown in the fourth. On 2nd February 2013, he faced  Jose Ruiz of Puerto Rico and win by technical knockout (TKO).

On 9th May 2015, Diaz won against Giovanni Delgado via unanimous decision on the undercard of the Canelo Alvarez vs James Kirkland fight. In July 2015, he defeated veteran Rene Alvarado in a fight televised on HBO Latino.

On 18th December 2015, he defeated Hugo Partida and won the WBC-NABF featherweight title. Since he has retained the title twice against Jayson Velez and Victor Proa.

Almost a decade in professional boxing has earned JoJo Diaz a good deal of money. As of 2021, his net worth is approximately $1 million.

Joseph Diaz is not married but he is not single either. The boxer is in a romantic relationship with his girlfriend, breezh for a long-time now. Reportadely, the couple have been dating each other for more than three years. 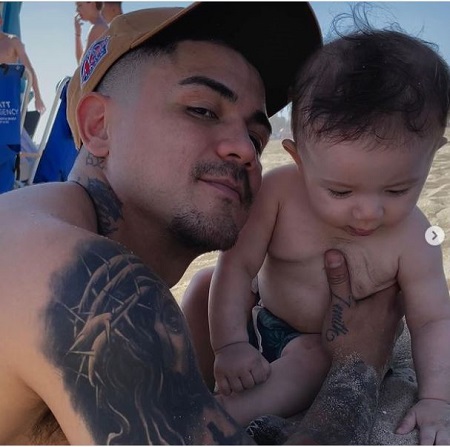 In mid-June 2020, the pair come out with surprise to their fan, announcing about expecting a baby. In November 2020, they welcomed their first child, a son, Zenith Joseph Diaz. Since, he is regular with his son's post on his IG.