How Much Is Rene Alvarado's Net Worth?

As of 2021, Rene Alvarado's net worth is approximately $0.1 million. The significant source of his earnings is his boxing career by winning matches and securing sponsorship as well as becoming an ambassador for the sport outside the ring.

Nevertheless, there is no exact figure how much he makes per fight. Definitely, there will be a bonus if he wins. According to the source, in the initial phase, fighters make about $1,000 to $4,000 per fight, or from $5,000 to $10,000 per fight in the midrange. Most boxers have only about four fights per year, so the salaries here are not staggering. Further, the average pro boxer earns $35,584 per year

With paparazzi always on the prowl and numerous ways to connect with social media, Rene Alvarado has maintained his personal life as private as possible. But that does not mean the public is unaware of him being married.

Yes, Rene Alvarado is a married man. Though there is less to no information regarding his wedding and wife, he sometimes posts pictures with his spouse on his socials but with no tags and that's mean her name is still secret. Further, some online tabloids suggest they share son too. But nothing is confirmed.

Turned professional on 2nd May 2008, he kissed victory on his debut fight over Cristobal Ramos at the Casino Pharaohs in Managua, Nicaragua, scoring a second-round knockout. He compiled a record of 32 wins and 9 losses before facing Roger Gutierrez at American Airlines Center, Dallas, Texas, the U.S. on 2nd January 2021.

The twin brothers share a strong bond: whether it is in the gym or their place of residence in Las Vegas, which Rene states began when they were children growing up in Managua. He further added “We were close because of our mother. We support each other. There was great motivation on my part when he became a world champion. My goal is to become a great champion because of him." 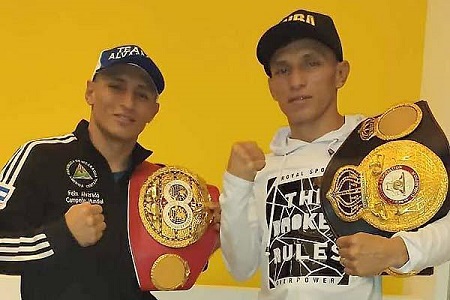 Outside of the ring, Rene enjoys playing soccer, spending time with his family, and watching movies. Though there is not much information about his parents: his father often appears here and there on Rene's IG posts whereas his mother already passed away.