Canelo Alvarez was born Santos Saul Alvarez Barragan on July 18, 1990, in Guadalajara, Jalisco, Mexico. He is among the eight children born to Ana Maria Barragan and Santos Alcarez. He is the youngest of eight children, and his brothers Ramon Alvarez, Ricardo Alvarez, and Rigoberto Alvarez. are also professional boxers. Canelos started his boxing career in his early teens. He has not shared much information about his early life with the public.

Canelo Alvarez Net Worth and Earnings

Canelo Alvarez has an estimated net worth of more than $100 Million. He is one of the highest earnings boxers in the world. Alvarez signed a five-year, $365 million contract with Oscar De La Hoya's promotion company DAZN back in 2018. In 2019, Forbes listed Alvarez among the Highest Earnings Sports figure. He took home $37 Million, which included $35 Million as his salary and winning prize and $2 Million from Endorsements. 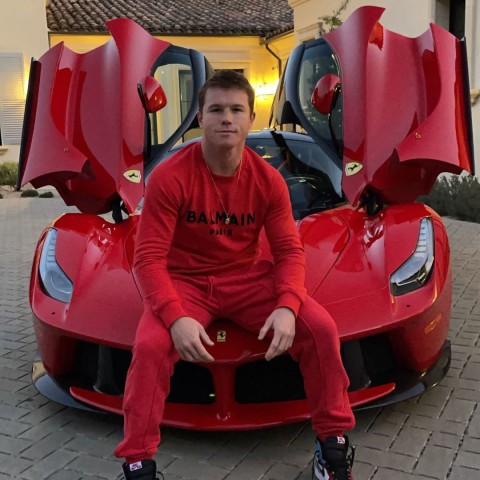 Canelo shares a photo with his car SOURCE: [email protected]

In November 2015, Canelo fought for the WBC, Ring, and lineal middleweight titles against Miguel Cotto. The fight generated 900,000 buys on PPV, which equated to around $58 million in domestic revenue. The following season, Alvarez generated a live gate of $7,417,350 from his match against Amir Khan. The fight drew close to 600,000 PPV buys.

In early 2017, Alvarez won his fight against Julio Cesar Chavez Jr. via a unanimous decision which earned him $5 Million, while Cesar took home $3 Million. The same year, Canelo made a minimum of $5 Million from his match against Gennady Golovkin.  From this match, the revenue exceeded more than $100 Million. In 2018, they had a rematch, and this fight generated a live gate of $23,473,500 from 16,732 tickets sold and collected revenue at around $94 million. Totaling Canelo's Renevue from nine major contests, it sums to $605,000,000.

Alvarez has fought a total of fifty-eight professional boxing matches in his career. He has won fifty-four games and lost just a single bout while drawing two. Canelo lost his only fight in 2013 against Floyd Mayweather and has remained undefeated to date. He won his first title in 2007, the Jalisco welterweight title. Alvarez finished his amateur career with 44-2 including12 knockouts.

He won the silver medal at the Junior Mexican National Championships and made his professional debut in 2005 against Abraham Gonzalez. The Mexican boxer won the Jalisco welterweight title in 2007 against Ricardo Cano. In 2009, Canelo won his first WBO title, Latino Welterweight. He defended his title in more than a dozen matches and won WBC light middleweight title in 2011. In 2013, Alvarez won  WBA (Unified) and vacant The Ring light middleweight titles against Austin Trout but lost in the next match against Floyd.

In 2015, Canelo won  The Ring and vacant WBC middleweight titles against Miguel Cotto. He has been defending and retaining all of his titles since 2015. In 2019, Alvarez won his last title of WBO light heavyweight against Sergey Kovalev. He played his last fight against Callum Smith in December 2020 and retained his titles. He is set to defend his WBA (Super) title, WBC, and The Ring super middleweight titles against Turkish professional boxer Avni Yildirim.

Canelo is the proud father of four children. He is unmarried currently but is reported to be engaged in a relationship with his girlfriend Fernanda Gomez. The Mexican boxer is dating Fernanda since 2018. Canelo and his partner first met in October 2017 at an OMB Gala. The pair also have a daughter together. He is living a happy life with his partner and his children.

Gomez is a model and has appeared in several ads and cover magazines. 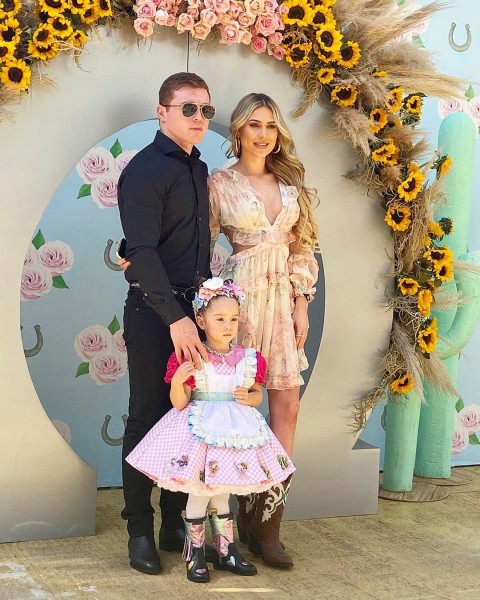 Canelo with his partner and their child SOURCE: [email protected]

Alvarez is not only famous for his successful career in boxing but also known for his relationships. He dated several women in the past Alvarez was involved in a romantic relationship with a Mexican television personality, actor, and beauty pageant titleholder Marisal Gonzalez Casas, who competed in the Miss Universe 2003 pageant, in 2010. The couple was engaged to each other but parted ways a year later. 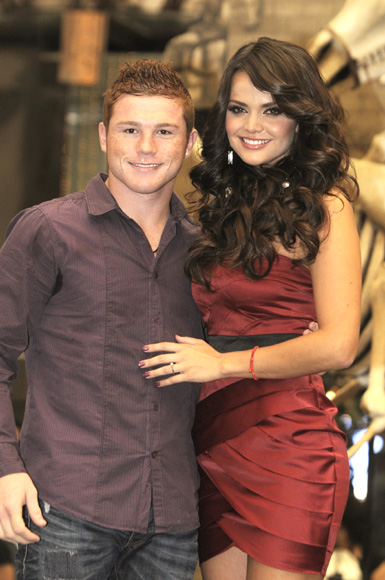 His other three children live with their biological mother, but Alvarez takes care of their needs.

Canelo was born in Guadalajara, Jalisco, but his family moved to Juanacatlan, Jalisco, where he was raised with his siblings. He goes by the nickname" Canelo or Cinnamon. It was his coach Chepo Reynoso, who gave him the nicknames. Chepo has been training with him since 13 years old.