Johannesburg, South Africa native, Chris van Heerden was born on 19th June 1987, under the star sign Gemini. By nationality, he is a South African and is of White South African ethnic background. Heerden stands 5 ft 9 in (1.75 m) tall.

Soon after Heerden's debut, he quickly emerged as a top fighter in the African continent which he subsequently proved by winning South African and ABU welterweight titles. However, in 2010 he faced his career first loss in the professional ring to Serbian Ivica Stevanovic for IBF Inter-Continental light middleweight title.

Rebounding from loss, he became even more dedicated and prevailed over fellow South African Kaizer Mabuza and won the IBO welterweight belt on 24th November 2011. Further, he managed to defend his belt twice, against Sebastian Andres Lujan and Matthew Hatton on 16th June 2012 and 2nd March 2013 respectively. .

In Winter 2013 Heerden moved to the United States. The movement mean that the boxer had been forced to relinquish his status as the International Boxing Organisation’s champion but it was a move that he considered to pave the way to higher honors in the future. His first title in the United States was IBF International welterweight title which he won on 9th January 2015 against Cecil McCalla. His most recent fight against Jaron Ennis was called no contests on 19th December 2020.

South African boxer Chris Van Heerden lost his father, Daniel Christoffel Van Heerden in 2018 who was shot dead in South Africa. The sixty one years old was shot by security guard and slipped away in the arms of his son, DonJaun, who is a MMA fighter. Chris wrote, “R.I.P Daddy – 1957-2018. The world needs to know what is happening in South Africa. The White populations are being murdered one by one. Yesterday my dad was a victim of this!" 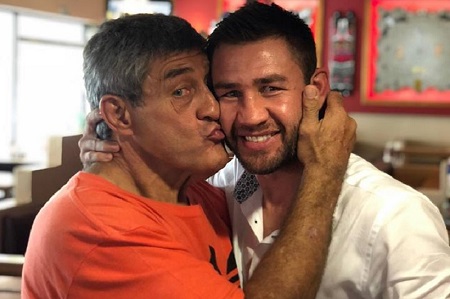 Chris often post pictures with his dad on his socials addressing how much he misses him. On 30th October 2020, his caption on the picture with his day kissing him was so heartfull, "I miss you A LOT tonight big guy. If you are still lucky enough to call your dad DO IT Tell him you love him tell him you miss him and make sure he knows that you are grateful for everything he sacrificed for your happiness and future R.I.P Daddy."

Chris van Heerden's net worth is approximately $0.5 million as of 2020. Not to mention, the significant source of his earning is boxing. There is no typical salary in the boxing: they earns through prize money which they receive for winning and participating in fights. The median salary for a professional boxer is $51370.

Outside the ring, endorsement plays a vital role as source of income. Among other, he is sponsored by Winning USA. Besides, the boxer is yet to revel other financial aspects.