George Kambosos Jr is an Australian professional boxer who has held the IBF Pan Pacific Lightweight title since 2017. As of May 2021, the Greek descent boxer has a fight record of 19 wins and 0 losses.  He is the former winner of the Australian NSW, Australian, WBA-PABA, and WBA Oceania lightweight titles between 2013 and 2017.

Kambosos Jr was born on June 14, 1993, in Sydney, New South Wales. His grandparents hail from Sparta. He was initially a rugby player during his early years. He though later opted for a boxing career and amassed 85 wins in 100 amateur fights before turning professional.

Kambosos made his professional boxing debut against Filipino fighter Jayson Mac Gura. The then 19-year-old Kambosos was victorious via a second-round technical knockout. He won his first title, WBA Oceania, by beating world number nine Brandon Ogilvie. He then triumphed over Qamil Balla in May 2017; the decision went in the favor of Kambosos via unanimous decision in a ten-round fight. Five months later, he defeated Krai Sethaphon in the ninth round and won the WBA Oceania and IBF Pan Pacific titles in the lightweight division. In June 2017, he was summoned by Manny Pacquiao as his main sparring partner in preparation for the bout with Jeff Horn and has remained Pacquiao's main combat partner for his several fights that followed. He made his US debut in May 2018 and had a victory over Jose Forero in just 1 minute and 48 seconds.

The next year on January 19, he bested Rey Perez at the MGM Grand in Las Vegas on the undercard of Pacquiao vs Adrien Broner. He won the duel via majority votes in an eight-round fight. On June 7, 2019, at his native land of Greece, Kambosos knocked out Venezuelan 11-2 Ricard Pena in round six at the Galatsi Olympic Hall. In December of that year, he defeated former IBF lightweight champion, Mickey Bey by a split decision on the undercard of Terence Crawford vs Egidijus Kavaliauskas.

On October 31, Kambosos defeated Lee Selby (former IBF featherweight champion) by a split decision at the SSE Arena in London. The win made him the mandatory challenger for the IBF lightweight title against Teófimo López. The fight is set to take place on 19 June 2021 at LoanDepot Park in Miami, Florida.

Boxing journalist, Daniel Rafael says, Kambosos, in his upcoming fight against Teofimo Lopez, is expected to make a guaranteed $2.1-$2.7 million minus whatever his deal is with DiBella, his promotional partner company.

As per Some reports, this is by far the biggest payday of his career. While there is little to no documentation of Kambosos' purses before Lopez, he now, at the least, can sure to called a millionaire boxer. 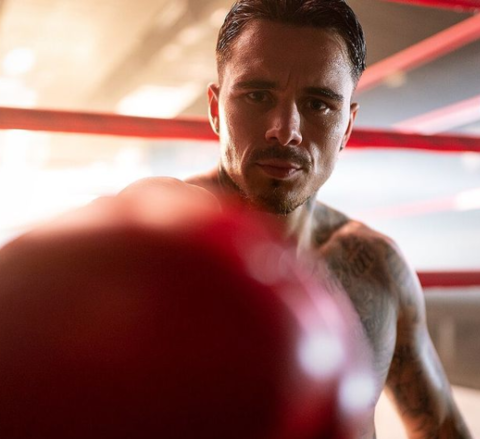 George Kambosos Jr made his professional boxing debut at the age of 19 when he faced Filipino fighter Jayson Mac Gura SOURCE: Instagram

But that isn't to say, this is the first time he has broken the seven figures threshold in his career. Competing under the WBA franchise almost always facilitates the fighters to earn purses in the region of hundreds of thousands per fight.

With an impressive record of 19 wins and no defeats, Kambosos must have had leverages in his bygone fights - in terms of money and bonuses. And the saying - he net worth is in the two commas club - is hardly disputable.

Kambosos is currently in a relationship with Bec Pereira. Together, the couple shares two children, a girl named Evaliahs, born, July 21, 2017, and a boy named Leonidas, born, July 22, 2019. Additionally, they are also expected to have their third child in September 2021. Kambosos' wife announced the news through her Instagram on April 14, 2021, posting a picture of her two children, subsequently captioning the imaging with the statement, "Oops We Did It Again...Baby Kambosos Number 3, Will Be Making An Appearance September 2021."

Kambosos and Pereira have been dating each other since mid-2014. The Australian boxer first debuted on his future partner's Instagram on June 29, 2014. Throughout the posts that followed, Pereira would go on to confess her love for Kambosos with words/emotions like baby, red heart, and amongst others. Sources are unsure if the two are married as the pair is yet to be seen walking down the aisle.