He won his unified light-welterweight title by knocking Julius Indongo on Aug 19, 2017, in Nebraska and holds a record of 32-0 with 23 knockouts and now has collected all of the major boxing titles in the 140-pound division. Previously, he won the WBO, Ring, and lineal lightweight titles in 2014.

Crawford was born as Terence Allan Crawford on Sep 28, 1987, in Omaha, Nebraska, United States. Regarding nationality, he is an African-American boxer. Born at the end of September, his astrological sign is Libra. Terry Crawford and Debbie Crawford are his parents and Latisha and Shawntay are his sibling.

Crawford took up interest in boxing from his early age. As an amateur, he defeated future champions like Mikey Gracia and Danny Gracia and won 58 out of 70 amateur bouts.

Crawford made his professional debut on March 14, 2008, defeating Brian Cummings in Round 1. Being a most decorated boxer, he has won several championships and tournaments until date.

Crawford has earned all major world titles including WBA, WBC, IBF, and WBO including The Ring Magazine and lineal championship) and he is the fourth boxer in the history of boxing world to accomplish so after Taylor, Bernard Hopkins, and Cecilia Braekhus. 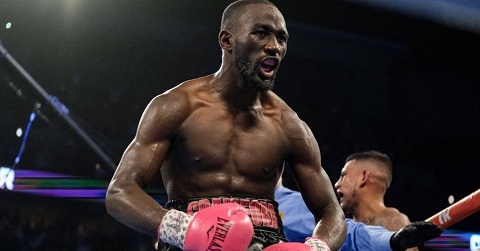 As of August 2017, Crawford ranked as the world’s third-best boxer by the Transnational Boxing Rankings Board and Box Rec. In 2014, Crawford was named Fighter of the Year by the Boxing Writers Association of America and ESPN.

Crawford widely admired for his fast hand speed, punching power, quickness, accuracy, and his defensive skills. He also has the ability to switch hit from orthodox to southpaw.

Crawford is a married man. He married his long-term girlfriend, Alindra Person after having an affair with her. Like other celebs, Crawford has not mentioned romantic parts of his personal life, how she met and proposes Alindra, their marriage celebration all are still a mystery to his fans.

Currently, he happily resides at Omaha, Nebraska along with his five children. One of his children is named after him as Terence Crawford III. Despite having a busy schedule, he has maintained a perfect balance between his professional and personal life.

Merry Christmas From My Family To Yours!!!

Unlike other celebs, Crawford has been in many controversies. He was accused of theft of services, criminal mischief, third-degree assault, and trespassing.

Crawford has reached the age of 29 now. He has a height of 5’8”, which is around 1.73m. Further, Crawford has hobbies of fishing, tennis, and adventure traveling. His favorite players of tennis are Serena Williams, Rafael Nadal, and Roger Federer.

Net Worth & Salary of Terence Crawford

It has been a long journey for Crawford to establish himself as one of the successful boxers. He has made a huge fortune through his career earnings and salaries.

Through bout against Viktor Postol, he made around $1.3 million. He earned $109 million through his fight against John Molina. He has a whopping net worth of $6 million. Previously, he was among the top money making boxers but has dropped below 10 in 2017.