Joseph Diaz was born Joseph" JoJo" Pedroza Diaz Jr. on November 23, 1992, in South El Monte, California. Joseph was born to Joseph Diaz Sr. and his wife, Valerie. His father is also a boxing coach and remains as his coach from his initial days. Diaz is of Mexican descent. He graduated from South El Monte High School.

What is Joseph Diaz Earnings? Know About His Net Worth and Prize Money

Joseph Diaz's exact net worth is still under the radar. Diaz is yet to share information about his earnings and net worth with the public. He has been fighting in the boxing ring for almost a decade and must be earning a good figure. Zelfa Barrett is another famous English Boxer whose net worth is also still under investigation.

Joseph shares a photo along with his title SOURCE: [email protected] josephdiazjr

The average salary of a professional boxer is more than $50,000. A fighter has several income sources like fixed prize amount, pay-per-view paycheck, bonus, sponsorships. Joseph had a promotional deal with Golden Boys in 2018. However, after a fight in 2019, the boxer shared his displeasure with his promoters and parted ways.

In 2020, MTK Global announced the signing of IBF super featherweight champion Joseph ‘JoJo’ Diaz on an advisory deal. In an Interview, Diaz said," I’m very excited to announce that MTK Global and I are now working together".

Who is Joseph Diaz Dating? Know About His Relationship Status

Joseph Diaz is still unmarried but is in a romantic relationship with his girlfriend. He has been dating a girl named breezh. Diaz does not share much information about his personal life, but following his social media post, we can be sure that they have been dating each other for more than three years. 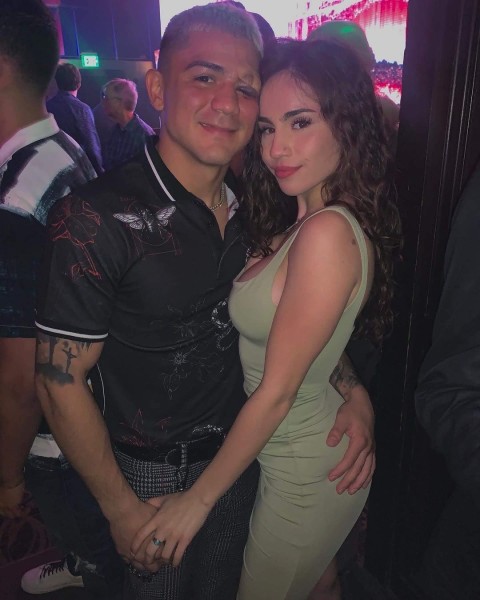 In mid-June 2020, the love birds opened about expecting a baby. In November 2020, Diaz and his partner welcomed their only child, a son, Zenith Joseph Diaz. He shared the birth of his child through his Instagram post.

Joseph played baseball in his early days but took up boxing to learn self-defense. He came into the limelight after he qualified for the 2012 Olympics and was a quarter-finalist at the 2011 World Championships. The fighter won the 2011 U. S National Champion at the featherweight division. Soon after the 2012 Olympics, Joseph turned professional.

Joseph started his professional career with a win over Vincent Alfaro via a unamious decision in 2012. After fighting in over 18 matches, In 2015, Diaz got a game for the vacant WBC-NABF featherweight title up against Hugo Partida. He won the match via TKO in the second round. Joseph retained his title in the next five games and won the WBO-NABO featherweight title.