Gennady Gennadyevich Golovkin well recognized by his ring name, "GGG" or "Triple G", is a Kazakhstani professional boxer who is a two-time middleweight world champion, having held the IBF and IBO (2019-present). Earlier, he held the unified WBA (Super), WBC, IBF, and IBO titles as well as was ranked as the world's best boxer, pound for pound (September 2017 - September 2018) by The Ring magazine.

How Much Is Gennady Golovkin's Net Worth In 2020?

As of 2020, Gennady Golovkin's net worth is $30 million. The significant source of income is his boxing career. In 2019, he signed with streaming service DAZN in a deal worth more than $100 million for six fights. According to Forbes, he makes $23 Million from salary and winning and was ranked #95th in The World's Highest-Paid Athletes 2019 which eventually dropped off in 2020. The median salary for a professional boxer is $51370.

As of November 2020, Gennady is ranked #4th in the world's best active boxer, pound for pound, by BoxRec. Further, he is listed sixth by the TBRB, seventh by Boxing Writers Association of America, and tenth by The Ring and ESPN.

Also, he is 2nd in the world's best active middleweight by BoxRec, The Ring, Transnational Boxing Rankings Board (TBRB), and ESPN. Further, BoxRec ranked him the second greatest Asian fighter of all time, pound for pound.

Gennady Golovkin is married to Alina. The couple tied the knot on 7th July 2007, in an intimate ceremony. The boxer prefers to keep his family and professional life separate, so very little is known about Alina. She rarely ever appears ringside at his fights. 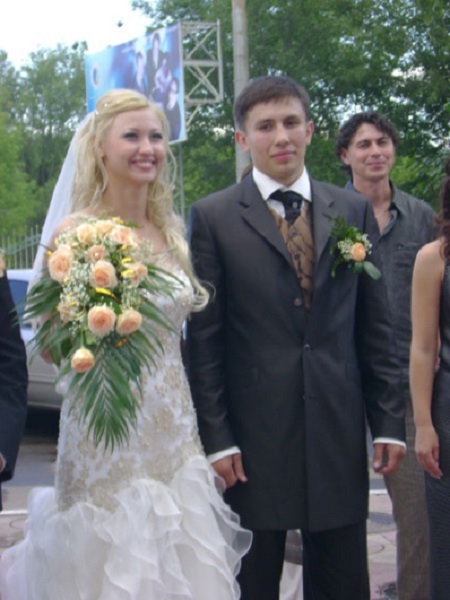 The couple shares a son who is in primary school, and a daughter who was born days before his fight with Canelo Alvarez, on 15th September 2017.

Golovkin speaks four languages: Kazakh, Russian, German, and English. Golovkin said he wanted his son to attend school in California because his training camp, team, and promotions are based in California, he has many friends there and he considers it a beautiful place. Golovkin enjoys playing games with his son and spending time with his family.

Golovkin was born to Gennady Golovkin Sr., a Russian coal miner father, and Elizaveta Golovkina, a Russian-Korean, who worked as an assistant in a chemical laboratory. He was raised alongside three brothers, two elder named Sergey and Vadim and a twin, Max.

When he was eight years old, Sergey and Vadim encouraged Golovkin to start boxing. In 2012, his fraternal twin brother Maxim who is an amateur boxer joined Gennady's camp and team.