If you love watching MMA and UFC, Islam Makhachev must not be a new name. Islam is a well-known Russian Professional Mixed Martial Artist. He has been fighting in the UFC in the lightweight division. The fighter is training with one of the best UFC Fighter, Khabib Nurmagomedov.

Islam Makhachev was born Islam Ramazanovich Makhachev on October 27, 1991, in Makhachkala, Dagestan ASSR. Islam has become successful in keeping his personal life away from the public. Talking about his physical appearance, Islam stands five feet and ten inches tall and weighs 70 kgs.

Islam Makhachev turned professional in 2010 and must have earned a reasonable sum through his fights. Islam has an estimated net worth of more than $300,000. As per sources, Makhachev has earned more than $500,000 from his MMA career. Also, he has earned $ 312,500 from the UFC matches to date. 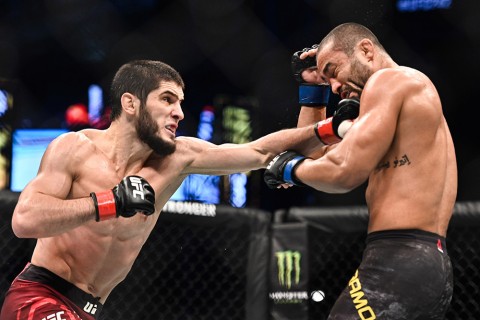 A UFC fighter earns a reasonable sum through his pay-per-view cuts, money from sponsorships, and other sources. He is very much early in his career and shall be making much more in the days to come.

Islam is an active social media user and keeps posting photos of his training and his games. Following his posts, It seems like the Russian fighter is living a single happy life on his own. There is no precise information about his relationship status with the media.

Makhachev seems to be focused on his career rather than spending time with people. The relationship status of Islam remains to be a mystery to the public. He likes to visit and explore new places. He spends his free time traveling to Gulf countries and the United States.

Islam played his first professional fight in 2010 up against Magomed Bekbolatov at the Tsumada Fighting Championship. In 2011, He made his MMA debut up against Tengiz Khuchua in the M-1 Global; he won via a KO in the second round. Islam came to the limelight after joining the UFC in 2014. He played his final bout for the M-1 Global against Ivica Truscek.

In 2014, Makhachev signed a four-year contract with the UFC. He made his UFC debut at UFC 187 with a win over Leo Kuntz via submission in the second round. Islam lost his first professional match-up against Adriano Martins in the UFC 192. He took a year off and trained hard for the next match. Since then, he has not lost a single game.

In 2016, Islam made his comeback against Chris Wade and won the match via an unamious decision. He played his last game of the UFC 242 in 2019 and won the fight against Davi Ramos. In 2016, The fighter won the gold medal in the World Combat Sambo Championship. In his eighteen games, Islam has won three via KO, seven via Submission, and eight via decision.