Winner Of Tyron Woodley Vs. Darren Till, Or anyone from GSP, Nick Diaz, Khabib, McGregor; Colby Covington's New List Is Super Long 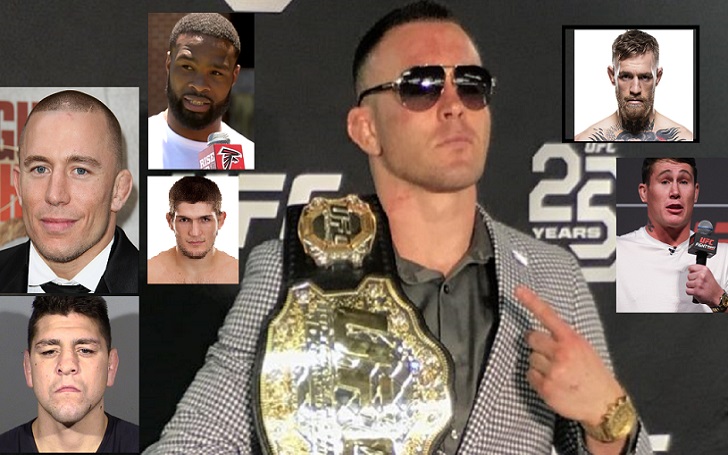 Colby Covington couldn't fight Tyron Woodley right away after his recovery as he got caught with a bad sinusitis. Though he was named an interim welterweight champion after his fight with Rafael dos Anjos, he still couldn't unify the belt and had to give away his interim title which he before some days presented on the table of President Trump.

Tyron Woodley and Darren Till are going to fight at UFC 228, but if in case any one of them decide to pull out he is very much willing to fill in space.

As per chaos, he is now fit and eager to return to the Octagon and defend his belt as he is the real champion. But, this wasn't yet, he went on to take some of the famous names in the UFC and said that he is open to fighting GSP, Diaz, Conor, and even Khabib so, let's quickly get to the chaotic details and know who else is on the Covington hit list.

Covington In a recent interview with Damon Martin from MMA Weekly told:

“There’s only a couple of fights that would make sense for me. There’s obviously defending my undisputed belt against the No. 1 contender winner — Darrell “Doughboy” Till or Tyquil Woodley — but there are some other fights that present themselves”

After saying that, he took out a few known names and the first he called out and jumped after was of the UFC legend GSP. He called out the former Welterweight and Middle Weight Champion Georges St-Pierre, who is rumored to return to the Octagon later this year, possibly in Toronto, Canada.

Covington put the ‘syrup sucker’ tag on GSP's name and called him out loud:

“GSP, that little syrup sucker, he can come, get this. He thinks he’s the greatest welterweight of all time. I have something else to say about that. I’ll destroy him. I’ll send him back to Canada crying. He can eat his little poutine there. I’m going to get my poon-tang here in America like a real American champion.”

Next, he went after Stockton's bad boy Nick Diaz, who has been out of the UFC for almost three years after his fight with Anderson Silva which resulted in a no-contest.  Covington has also been involved in a social media mockery on Diaz lately, and he took out his name saying:

“Nick Diaz is another guy, If he stops beating women, he can come get it, too. He’s probably going broke soon cause he’s been in jail and he’s spending all his money on drugs. He can come get this ass whooping, too.”

Covington after revolving around Welterweight and middleweight came down a weight class to challenge Khabib Nurmagomedov and Conor McGregor, who are fighting for their 155-pound strap at UFC 229 on October 6.

“There’s a couple lightweight ­— Khabib and Conor, — if they want to make a claim to another belt, I’ve got the undisputed welterweight belt. So those fights might present themselves, Besides those fights, that’s the only ones out there in the universe for me right now.”

Covington, 30, has missed his clack at T.Woodley after he developed a health issue, but he is still not stripped off his interim title, but after Woodley and Till officially make weight for UFC 228, he would officially be stripped of his WW belt and would have his shot at the winner. If Woodley gets out victorious,  American Top Team standout will fight his teammate for a title.