Tyron Lakent Woodley best known as Tyron Woodley is an American professional MMA fighter who currently fights in the Welterweight division of the UFC. A professional since 2009, he has also competed in Strikeforce. As of November 2018, Woodley is ranked 6th in the official UFC pound-for-pound rankings. He also held the Welterweight title most recently before losing it to Kamaru Usman at UFC 235.

Along with a flourishing career, Woodley has a wealthy personal life too. He is married and has four children. As of 2018, his net worth is estimated at around $4 million.

In Dec 2017, UFC welterweight champion Woodley gifted his mother a house for Christmas. In fact, that’s a promise he made when he was 10 years old and fast forward to 2017 he’s made good on that promise.

Tyron Woodly, 36, is a married man. He tied the knot with his long-time girlfriend, Averi Woodley, a fitness guru. The couple first met while in high school and later reconnected at Southern Illinois University Edwardsville. Woodley together with his wife is blessed with four children: Gabby, Dylan, Darron, and Tyron Jr. 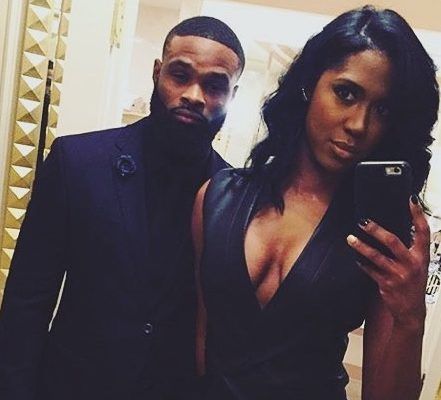 Recently, Woodley was caught cheating on his wife. The paparazzi snapped some pictures of him cup caking with a woman who was not his spouse. Besides, there are no rumors of Woodley being involved in any kind of affair with other women.

He is a successive player, he has a perfect persona, he has attractive eyes and blonde hair, and he has perfect height, he has a standing height of 5 feet and 9 inches and his total body weight is 170 lbs.

He is socially active on social networking sites. People followed him on Twitter. Moreover, info about his bio & career can be taken from the wiki.

Tyron Woodley was born on 17th April 1982 in Ferguson, Missouri, United States. His star sign is Aries. As per nationality, he is an American and is of Afro-American ethnicity. Woodley is the 11th of 13th children born to Deborah and Sylvester Woodley. However, his father left the family early in his life, thus, he was raised by his mother as a single parent.

During his time in high school, Woodley was a two-sport athlete, competing in amateur wrestling and American football. Upon graduation from McCluer High School in 2000, he enrolled at the University of Missouri where he joined their wrestling program.

There, Woodley became a two-time All-American (2003, 2005). In 2005, he graduated from the university majoring in Agricultural Economics.

On 7th February 2009, Woodley made his professional MMA career debut against Steve Schnider at Headhunter Production. He won the fight via submission in round one. He next defeated Jeff Carstens at Respect Is Earned.

In June 2009, Woodley signed to Strikeforce and made his debut against Salvador Wood. He won the fight via submission in round one. He had nine more fights at Strikeforce where he recorded 8 wins and 1 loss.

On 2nd February 2013, Woodley made his UFC debut against Jay Hieron at UFC 156, where he won the fight via KO in round one. However, he was defeated in the following fight by Jake Shields through the split decision in round three.

Rebounding from loss, he returned to fight at UFC 167 where he faced Josh Koscheck and successfully defeated Koscheck by KO. He next faced Carlos Condit at UFC 171 and won the bout.

On 14th June 2014, Woodley went on the fight against Rory MacDonald. He lost the match via unanimous decision. Following the loss, he made his come back later two months at UFC Fight Night: Bisping vs. Le and successfully defeated Dong Hyun Kim.

He lost the Welterweight title against Kamaru Usman recently at UFC 235 on March 3, 2019. He lost the fight via unanimous decision. He is scheduled to fight Gilbert Burns at UFC on ESPN 9 on May 31, 2020.

Besides MMA, Woodley is also a rapper and broadcast analyst. He also runs a show on TMZ known as the Hollywood Beatdown with Tyron Woodley. Other than being a UFC champion, T-Wood is also an actor, and has appeared in movies like Straight Outta Compton, Indian Superhit movie Sultan, and escape plan 2 alongside Selvester Stallion, 50-Cent.

Further, he is also a comedian and rapper, as he has recorded a single with Wiz Khalifa called I'll beat yo'ass which is available on i-tunes and does some comedy shows every now and then.