Watch Chael Sonnen Take Shot At Chuck Liddell Vs Tito Ortiz Trilogy Match, Should He Be Called As The King Of Trolls? 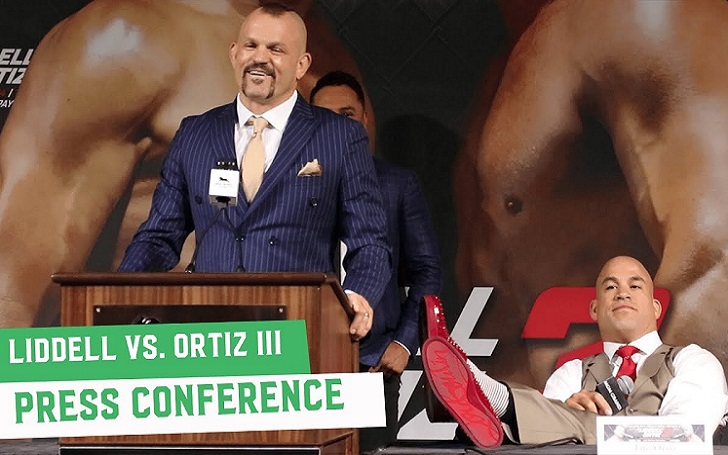 Chuck Liddell Vs Tito Ortiz three is happening tonight, and for every real MMA fan, this is an exciting fight for sure. Meaning, who doesn't want to see two of the first generation UFC Hall of Fame enlisted fighters inside the octagon for one last time before they hang their gloves. Further, this fight would godown in the book of histories and will entertain all fans rooting to bring them golden days back!

So, Oscar De La Hoya and golden boy promotions should be thanked for putting this event together. Despite being criticized by many as a cheap publicity stunt to promote Oscar's Golden Boy MMA promotion and at the same time  Golden Boy's attempt to encash two washed up fighters we definitely see a very entertaining fight going down tonight, 9 PM ET at The Forum in Inglewood, California.

Liddell 48, hasn’t fought since 2010, hasn’t won since 2007, wanted this fight as he had said that he wants to retire with a win whereas Tito Ortiz 43 wants a win over over Liddell as he is 0-2 short against the former LHW champ.

Wondering about the part where Chael Sonnen cuts in? Then here it is :-)

Chael Sonnen since last night has tweeted ten times on Liddell vs Tito trilogy, let's first see them here and then we shall talk about his insult video.

Oh, I've seen boring fights before, but they usually made me care about how bad they were. Watching this one will be like waiting for the bus in a city where you're not sure they have a bus line.

Reading a lot about this upcoming fight. People are calling Chuck and Tito things like "mixed martial artist" and "good". Those people apparently don't own a dictionary.

Tito Ortiz HAS BEEN a world champion. Chuck Liddell HAS BEEN one of the most feared fighters in mixed martial arts. The most important fact I've mentioned here is that both are HAS BEENS.

After this fight, when Chuck retires he’ll probably write his autobiography. When he does he'll have written more books than he's read. Look I'm not saying he's as dumb as dirt. I'm not. He's dumber.

https://t.co/lAMrlh8vUZ Chuck has the coordination of a stuffed animal.

So, in between all this, MMA's Takashi 69, Chael Sonnen or else known as Colby Covington's mentor did a kind of futuristic podcast in his Bad Guy Inc, trolling his former opponent Tito Ortiz who is fighting Chuck Liddell in a trilogy fight.

He in his 19th November's podcast said that Liddell Vs Ortiz bombed as no one was interested in watching the fight.  In his 2 minutes 15 seconds long podcast he said:

Chuck Vs Tito 3 happened and I don't take any pleasure, what so ever to say that the show bombed, but that was just the opposite, in fact, I never treated this as a joke to start with, I understood that this wasn't gonna be a fantastic Athletic competition but I think there was something special about this and mainly because of Chuck, and his honesty of coming out and saying

"this is a cash grab, I wasn't planning to fight again, and now somethings in my life has changed, and this is what I am gonna go out and do" - Shannon impersonating Chuck

He trolled and said, I am behind that, man! he was gonna get my 50 Bucks. I will tell you from the bottom of my heart, I sat down, I ordered food, I had drinks, I had the whole night cleared, I searched the television on Saturday, I couldn't find the channel that it was on.

He further said that he has one of these remote that he could speak in and he tried that too, but nothing popped up!

So, what was it? Was it MMA's troll king's way to get fans excited about this fight or was Chael eating A** and being the same old Chael Sonnen that he is? We don't know, as in between, he even pointed out that the pay per view for Tito-Chuck fight was $50, which is a pretty expensive card, to be honest, and he simply trolled the hell out Chuck-Tito fight but deep inside we feel that he is actually getting people more excited about it. Whatever it is, Chael can always turn around and say "jokes on you"

Here is a small information to all the fans who want to see this fight but are thinking that the event is way too expensive, then Golden Boy is offering it at half of its actual price, and now it's available at $25 only.