Also, Ben Askren and Jorge Masvidal will share shots for a three-round number one contender bout between in welterweight division. The event is expected to be a big Pay-Per-View. So let's take a look at UFC 239: Jon Jones vs. Santos Fight predictions, Card, Coverage, and Odds.

King of light heavyweight division Jon Jones has ridiculed the roster and has made bigger better fighters look like a punching bag over the years but this fight is appealing as an explosive fighter Thiago Santos has proven that he can knock anyone out.

Though Jon Jones is a betting favorite, Santos brings a huge threat to Johny's regime. When it comes down to skillset, Thiago Santos who is known for heavy strikes and explosive fighting style will surely show his Muay-Thai skills of slicing legs and he might unload on Jones as some point, but the experience reach and endurance speak on behalf of the current champion.

Though a good punch from Tiago has knocked many out cold, Bones can use his reach momentum to control the fight.

Added that Nunes who recently conquered belts in two divisions is expected to defend her belt against the former champion Holm.

Bones and Santos both are known for switching stands in an instance but many online betting sites have considered Tiago to be a heavy underdog at +400 on Santos. 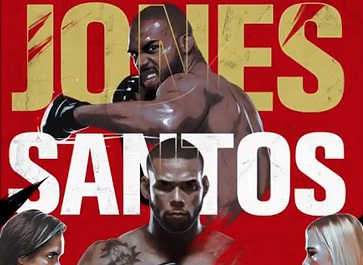 Further, the betting Odds for Holy Holm leaving with the belt wrapped around her west is at + 300, which makes her a heavy underdog against the champ's Champ.

The Coverage starts at 10 PM ET, and let's take a look at Saturday's card details