Troy Williamson is a retired American football wide receiver who played for the National Football League (NFL) for five seasons. In the 2005 NFL Draft, Williamson was picked by the Minnesota Vikings seventh overall. He finished his collegiate career in South Carolina.

How Much Is Troy Williamson's Net Worth In 2021? NFL Career Earnings & Contract

As of 2021, Troy Williamson has an estimated net worth of $7 million.

Troy Williamson is married to Charity Williamson with whom he shares a daughter and three sons. He often shares his family picture on IG. 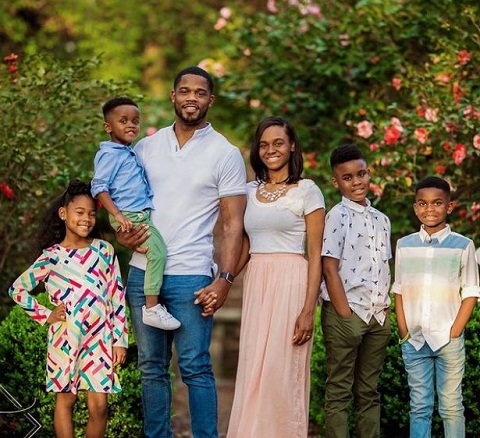 Troy Williamson's with his wife and children SOURCE: Instagram @troylwilliamson

Since Williamson has retired from NFL, the family is not in the spotlight.

Troy William enrolled at Silver Bluff Hogh School where he was a letterman and excelled in both football and track. As a senior footballer, he rushed for 890 yards and caught 21 passes for 500 yards (23.8 yards per rec. avg.).

He earned All-American, a consensus All-State selection, won Class-AA Player of the Year honors presented by the High School Sports Report, a Mr. Football finalist for the state of South Carolina. Further, he led his school tea,  to back-to-back state championships.

After trading Randy Moss to Oakland, The Minnesota Vikings were in deep need of a receiver, picking  Williamson with the 7th overall in the 2005 NFL Draft, using the pick acquired from trading Moss to Oakland.

In the 2006−2007 off-season, Moss claimed his hand-eye coordination was poor due to his depth perception which he gave the reason for his 11 dropped balls, which tied for second in the NFL. Additionally, Vikings' 2007 season was also difficult for Williamson, who finished with 240 yards and 1 touchdown.

After the 2007 season, Williamson was traded to the Jacksonville Jaguars for a 6th round pick (Jaymar Johnson). The Jaguars released Williamson on September 4, 2010.