D'Brickashaw Ferguson is a retired  American football offensive tackle who spent his entire 10 seasons NFL career with the New York Jets. He finished his collegiate career at the University of Virginia and was selected by the Jets fourth overall in the 2006 NFL Draft.

How Much Is D'Brickashaw Ferguson's Net Worth In 2021?

D'Brickashaw Ferguson's net worth in 2021 is approximately $50 million. His total NFL career earning is given below the table:

No doubt, D'Brickashaw is living a lavish lifestyle.

D'Brickashaw Ferguson is married to Kirsten Ferguson. The couple tied the knot on 2nd July 2011.

His wife Kirsten miscarried their first child. Kirsten was determined to start a family and she became pregnant again and lost that baby too.

Kirsten was angry with God, and D'Brickashaw kept his distance. Then a woman at church gave him hope and Kirsten became pregnant again, and finally gave birth to a daughter. A year later, they were blessed with another baby girl. 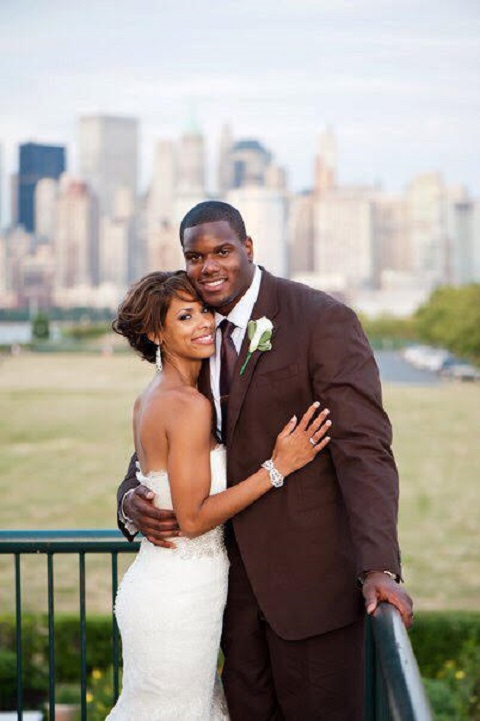 D'Brickashaw Ferguson and his wife SOURCE: I am fruitful

CT native, Kristen is a graduate of the Fashion Institute of Technology in NYC where she earned her Bachelor’s Degree in Advertising and Marketing Communications.

She was serving as a full-time employee at the National Football League in the Sponsorship Marketing Department where she managed multi-million dollar sponsorship accounts and sponsorship activation at such events as the Super Bowl, Pro Bowl, NFL Draft, NFL Combine, Kickoff, and the International Series in London.

After several years with NFL, she changed her career path and became a social activist, especially working with the D’Brickashaw Ferguson Foundation.

Ferguson was designated as Jason Fabini's successor and he started every game at left tackle for the Jets since the beginning of the 2006 NFL season.

On 8th January 2010, he was named for the 2010 Pro Bowl, replacing  Miami Dolphins Tackle Jake Long withdrew due to injuries. He was invited to the 2011 Pro Bowl.

"I would like to thank every coach, every teammate, and every fan that has shown me support throughout my career. I sincerely thank you all from the bottom of my heart," Ferguson wrote in his retirement statement.