Brian Urlacher is a retired American football linebacker who played his entire thirteen years-long careers for the Chicago Bears of the National Football League (NFL). He finished his collegiate career at the University of New Mexico and was picked by the Bears with the ninth overall pick in the 2000 NFL Draft.

Pasco, Washington native, Brian Urlacher was born on 25th May 1978 under the star sign Gemini. The forty-two years holds an American nationality and is of white ethnic background.

How Much Is Brian Urlacher's Net Worth?

During his peak career, he appered in various commercials for Nike, Domino's Pizza, McDonald's, Old Spice, Glaceau, and Campbell's. Also, he shared the screen with Peyton Manning in a MasterCard commercial at a Spa. Moreover, he was the cover athlete and spokesperson for Sega Sports' NFL 2K3.

As of 2020, Urlacher's net worth is approximately $50 million. Presently, he renting out his suburban Mettawa estate as a $9,000 per month escape from the Chicago coronavirus crisis.

Brian Urlacher's Wife: Is He Married?

Brian has married twice. He first tied the knot with Laurie Urlacher in 2000. The couple shared two daughters: Pamela and Riley. In 2004, Brian and Laurie divorced and their daughters currently live with Brian. 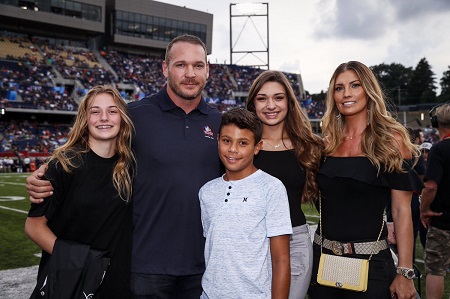 Brian Urlacher with his daughters, son, and wife SOURCE: Twitter

Further, he has a son, Kennedy through his relationship with Tyna Robertson. The couple has already broken up and he has visitation rights with his son.

Will in June 2005, Urlacher filed suit to confirm the paternity of his son Kennedy and it turns out Kennedy's biological father after genetic testing. Urlacher and Robertson maintain joint-custody over Kennedy.

In April 2012, Urlacher started dating model and actress Jenny McCarthy. Later five months it was confirmed that she and Urlacher had ended their relationship. 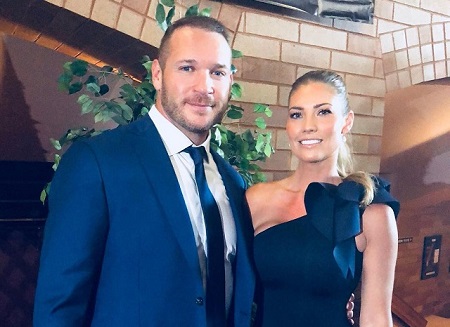 On 13th March 2016, Urlacher exchanged the vows with a former contestant on America's Next Top Model, Jennipher Frost.

Urlacher was born to Bradley and Lavoyda and grew up alongside his younger brother, Casey Urlacher. Following the divorce of his parents, Lavoyda raised Urlacher and his siblings.

During his high school, he played football, basketball, track, and later table tennis; he graduated from Lovington High School in 1996. Urlacher wanted to attend Texas Tech University, but the school did not offer him an athletic scholarship. Hence, he attended the University of New Mexico, majored in criminology, and played for the New Mexico Lobos football team.

After retiring from professional football, he was briefly an analyst for Fox Sports 1 but he resigned from the role to spend more time with his family.

On August 27, 2020, on Urlacher's IG story he criticized NBA players for boycotting playoff games over the police shooting of Jacob Blake as well as "liked" a post (now deleted )supporting accused murderer Kyle Rittenhouse and stating "Patriot Lives Matter," causing significant news and opinion coverage. The Bears team responded to the posts, saying "The social media posts in no way reflect the values or opinions of the Chicago Bears organization."