Lewis Ritson is a British professional boxer who held the British Lightweight title from 2017 to 2018 and was once the challenger for the European lightweight title in 2018. As of June 2021, he has a fight record of 21 wins and 2 losses.

Ritson was born in Newcastle upon Tyne, England on September 22, 1993. He started boxing at the age of eight and was an England international at amateur level and a dual-title champion of the TTW belts at 147 pounds and 156 pounds.

Ritson had his first pro career fight on April 4, 2015, against Kristan Laight. He won the bout via PTS after the fight had ended in the fourth round. In his next fixture, he defeated Janis Puksins on May 8, 2015. He enjoyed his third straight victory by knocking out Chris Adaway on June 4, 2015.

A month later, he competed against Simas Volosinas - winning the fight via result on points at the closure of the fourth round. 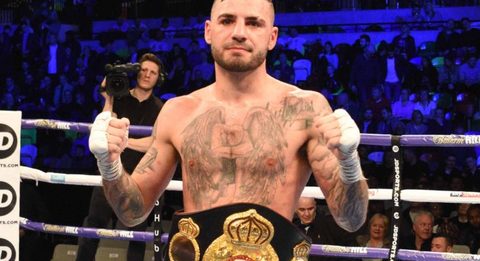 He was put up against Robbie Barrett for the British lightweight title on October 7, 2017. Ritson triumphed on the night through a decision TKO. He next successively defended the title against Joe Murray, Scott Cardie, and Paul Hylan Jr. He was on a 17 win streak looking for 18 ahead of his yet another title brawl, European lightweight. He though failed to achieve the feat after his opponent, Francesco Patera gave him his first career loss - that emerged through a split decision.

His following title included the WBA Inter-Continental Super Lightweight title which he secured besting German Argentino Benitez. He went on to win his next three fights before losing to Jeremias Ponce on June 12, 2021.

For a fighter who is just striving to make his impression in the boxing community, Riston's net worth is still a matter of guess works and speculations. There are certain things to be understood to best surmise the British boxer's fortune and his career earnings. 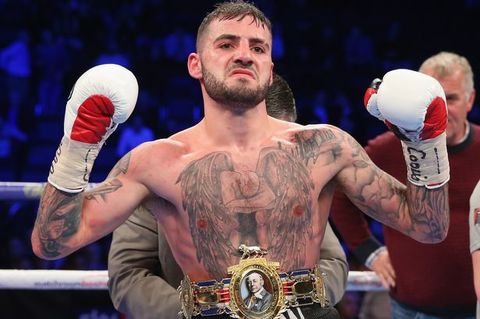 Considering so many variations and the lack of proper payment structure, an average professional boxer, such as Ritson has the potential to earn anywhere between $22,000 and $37,000 per annum. This typically is the average fighter's salary if he is a newbie to midrange. That, however, seems an understatement in the case of the English athlete, considering his impressive 21 wins and the career that has spanned over five years.

He has reportedly collected over half a million dollars in fight purses since turning pro in 2015. There's also a line of sponsorship deals to take into account that presumably has added a significant sum to Ritson's finances. Some of them include Ev 2 Sportswear, Match Room Boxing, and Botanic Oil. His net worth in that saying could very much be in the region of $400,000 to $500,000.

Ritson is engaged to his fiancee, Samantha Davidson with whom he shares a daughter, Darcie. She has been appearing alongside Ritson since his early fame - especially making numerous featuring on the boxer's Insta feeds. However, it wasn't revealed if they'd already been married or just living as a partner.

In fact, their baby girl was born even before the 27-year-old athlete had chosen to start sharing about his personal pursuits. 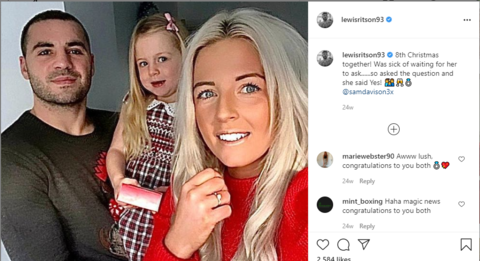 Lewis Ritson with his fiancee and daughter SOURCE: Instagram

On December 25, 2020, Ritson revealed he had been with Samantha since 2012. Celebrating the eight years of being together, he posted a picture of himself along with his girlfriend turned fiancee and their daughter.

The snapshot also declared his betrothal to Davidson - said through the caption, "8th Christmas together! Was sick of waiting for her to ask... so asked the question and she said Yes!"