Tom Dumoulin is a Dutch professional road bicycle racer who is known for his time-trialing ability as well as viewed by many as a climbing specialist. Currently, he rides for UCI WorldTeam Team Jumbo–Visma.

Maastricht, Netherlands native, Tom Dumoulin was born on 11th November 1990, under the star sign Scorpio. The thirty-year-old holds Dutch nationality. Originally he dreamed of becoming a doctor, but after not being offered a place at medical school he started a Health Sciences degree. After he did not enjoy classes and within a year he opted to pursue cycle racing for a year.

The earning of cyclists is highly determined by winning tours. Tom Dumoulin who is the first Dutch male winner of the Giro in 2017, earned him €265,668 in cash from the race. The following year, he finished 2nd in the Giro d'Italia. The second places prizes is worth 133,412 euros

The ultimate goal for many cyclists is to make it onto the UCI World Tour, where the minimum wage is $2.35 million.

As of 2021, Tom Dumoulin's net worth is approximately $1 million.

A Married Man: Who Is His Wife?

Tom Dumoulin is married to Thanee van Hulst. The couple became engaged in 2017 and tied the knot the following year in a secret ceremony. The wedding was held in Maastricht.

As per reports, the couple lives together in the Belgian town of Kanne. 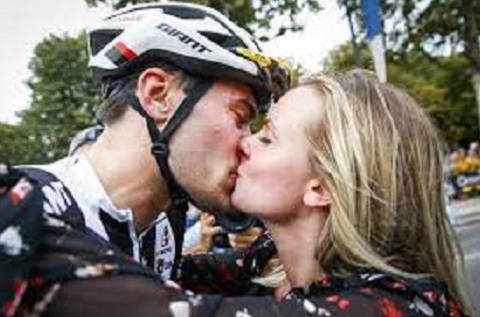 Dumoulin is active on IG with 123k followers where he has only posted his profession.

Dumoulin first came to attention while competing at the Grand Prix of Portugal, part of the UCI Under 23 Nations' Cup. He won the race's opening time trial, despite never having ridden a time trial bicycle before. Further, he went on to win the race overall. In the following years, he won a time trial stage of the Girobio. In 2011, he rode for the team Rabobank Continental.

Turned professional in 2012, he signed with the Dutch Project 1t4i team. That same season, he made his grand tour debut. He did not have any major win in his first two seasons. However, he already started to make his mark in major races, especially in time trials.

In the 2016 Tour de France, Dumoulin won two stages and then finished 2nd to only Chris Froome on the final time trial.

In 2017, he won the Giro d'Italia, becoming the first Dutch rider in history. Later that year, he won the World individual men's time trial Championships.

Then, in the Giro d'Italia, he won the 2017 edition and finished 2nd the following season, becoming the only rider inside a minute of Froome.

In the 2018 Tour de France, Dumoulin once again came in 2nd place overall and claiming another Stage win on the only Individual Time Trial of the Tour.