2020 Olympic Gold Medalist British Cyclist, Tom Pidcock is currently competing in the cyclo-cross, mountain bike, and road bicycle racing disciplines of the sport for UCI WorldTeam Ineos Grenadiers. Turned professional in 2017, he is with Ineos Grenadiers as of 2021. Earlier, he represented teams like Telenet–Fidea Lions (cyclo-cross), WIGGINS (road), and TP Racing (cyclo-cross, road).

Leeds, England native, Tom Pidcock was born on 30 July 1999, under the star sign Leo. His birth name is Thomas Pidcock but popularly goes by the name Pidders. The twenty-two years old holds a British nationality and is of Caucasian ethnic background. He stands 1.70 m (5 ft 7 in) tall and weighs 50 kg (110 lb).

Tom Pidcock is a rising cyclist who is making good pay from his profession. His net worth as of 2021 is approximately $0.5 million.

Not inexact, but the hunk is making somewhere six-digit figure per annum. Most recently, he won a gold medal at the 2020 Olympics which also earned him $37,500.

According to the source, the compensated riders in this stage earn $37,700 per annum, however, once a rider raises their status, The ultimate goal for many cyclists, however, is to make it onto the UCI World Tour, where the minimum wage is $2.35M.

Is Tom Pidcock In A Relationship?

Reportedly, Tom Pidcock is dating his Bethany Louise Zajac. His girlfriend is s a personal assistant and private piano teacher. 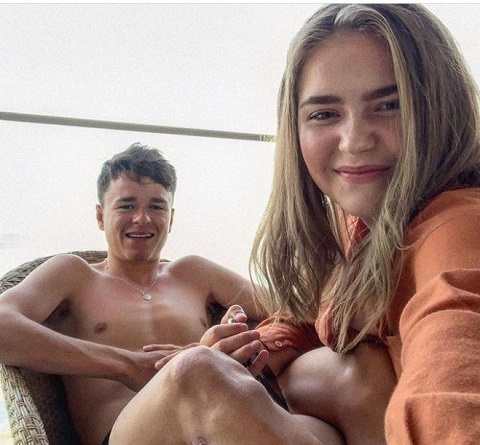 Scrolling through Bethany's Instagram, the couple is enjoying a blissful life, and they share beautiful pictures on their respective socials.

Pidcock is the son of Giles and Sonia. Both his parents were also cyclists. His father Giles represented Great Britain in the 1980 Olympic road race in Moscow. Moreover, his mother, Sonia, is a physiotherapist. Further, he has a younger brother named Joe.

Most prominently, Pidcock won the gold medal at the 2020 Olympics in Tokyo in cross-country mountain biking.

Additionally, his 2021 win at the UCI XCO (mountain bike) World Cup event in Nove Mesto na Morave 2021 was the first by a male British rider in 27 years, and he won by the largest margin (1'00" exactly) in the history of the event.