How Much Is Sonny Colbrelli's net worth in 2021?

The significant source of professional cyclists earning is prize money. Besides, there are sponsorship and endorsements for big names.

In 2021, Colbrelli won Paris-Roubaix. As per the source, organizers of Paris-Roubaix, ASO, opted to increase the total prize money for the men's race to €91,000, with the winner being awarded an increased amount of €30,000.

Besides, he has won various one-day races and classics which has helped Colbrelli to pursed a hefty sum. As of 2021, his net worth is $1 million.

Sonny Colbrelli is married to Adelina for a long time now. The couple also shares two adorable children, Vittoria and Tomaso, aged three and one respectively. 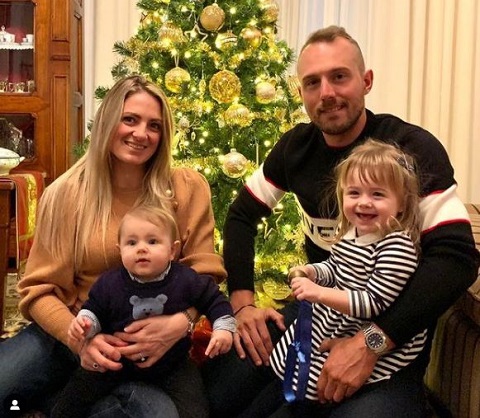 Sonny Colbrelli with his wife and children SOURCE: Instagram @sonnycolbrelli

Though there is not much information about his married life in the media, both Mr. and Mrs. Colbrelli has shared plenty of pictures on their respective IG which says loud about their life.

It is not known when they started dating but they have been posting each other since 2013.

Colbrell started competing professionally at the start of the 2012 season. He joined  Colnago–CSF Bardiani as a neo-pro, from the Zalf Desiree Fior.

At the 2012 Giro d'Italia, he made his Grand Tour debut, marking as a lead-out man for the team's sprinter, Sacha Modolo. Colbrelli took his first top ten placing on stage 13 when he finished ninth having led out Modolo to a fourth-place finish.

In 2017, he joined Bahrain-Merida. On 12th April, he won Brabantse Pijl. Later two months, he was named on the start list for the 2017 Tour de France.

In 2021, he won Paris-Roubaix. He crossed the finish line covered head to toe in mud and dust, beating out Florian Vermeersch and Mathieu Van Der Poel in the sprint.