Peter Sagan is a well-known Slovak professional road bicycle racer. He has been cycling in professional events since 2009. Sagan currently competes for the UCI WorldTeam Bora-Hansgrohe and will move to UCI ProTeam Team TotalEnergies in 2022. Peter has won more than a dozen of international events globally.

Peter Sagan was born on January 26, 1990, in Zilina, Czechoslovakia. He is among the four children born to Lubomir Sagan and his wife, Helena Saganova. His parents ran a small grocery shop in their hometown. Sagan has two brothers and a sister. His brother Juraj Sagan is also a professional cyclist and a member of the Bora–Hansgrohe team. Talking about his physical appearance, Peter stands six feet and one inch tall and weighs 78 kg.

A Decade Long Career in Cycling

Peter started cycling with his brothers from a very early age. He started to ride bikes at the age of nine when he joined Cyklistický spolok Zilina. In 2008, Sagan rose to fame, winning the  Mountain Bike Junior World Championship in Val di Sole and second in the Cyclocross Junior World Championships in Treviso and the Junior Paris–Roubaix. In 2009, Peter started his professional career signing with Dukla Trencin-Merida. In 2012, Peter made his Tour de France debut at the age of twenty-two and won at individual stages. Along with that, He entered into National Road Race Championships. The cyclist won a handful of events the following season, including Brabantse Pijl, GP de Montreal, Gent-Wevelgem, and a few more. At the end of the season, Peter was named the Athlete of the Year for the first time in his career.

Sagan started the 2014 season at the Tour de San Luis, where he finished second on the final stage. He won the Tour of California's penultimate stage and the sprints classification for the fifth successive year. The same year, Peter and his brother signed a three-year contract with Tinkoff with a salary of €4.5 million a year. Sagan won the silver medal at the Tour of Qatar. At the mid-season, Sagan won the Tour de California event.

Peter is believed to be single as of 2021. He is living a single happy life along with his son, Marlon. Sagan was first married to his longtime girlfriend, Katarina Smolkova. They had been dating each other for several years before their marriage. The love birds walked down their wedding aisle on November 11, 2015, at a private wedding ceremony. 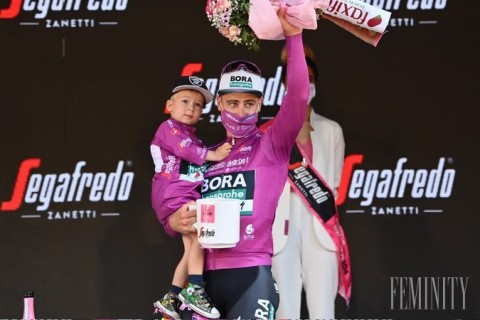 Peter celebrates with his son after an event SOURCE: Feminity

Peter and Katarina welcomed their first child, Marlon, on October 25, 2017. This marriage never remained the same after the birth of their son, and they separated in July 2018.

Peter Sagan has an estimated net worth of more than $10 Million. He has earned most of his net worth through his decade-long long-career in cycling. Sagan had an annual salary of  €6 million in 2016, which increased from €4.5 million a year in 2014.