Blessed with $50 million Net worth, Stock Car Racer Kyle Busch is living a Lavish Life. Know about his Wife and Family

American professional stock car racing driver and team owner Kyle Busch is one of the best racers known to the industry. He is a full-time competitor in Monster Energy NASCAR Cup Series and a part-time competitor in the NASCAR Xfinity Series. In addition, he is the owner of Kyle Busch Motorsports which runs many trucks in the Camping World Truck Series.

With his own car racing team and salaries from various competition, we can easily speculate that Kyle Busch lives a lavish lifestyle and has a fortune from his racing career. The question is, how much?

But before that let us turn the pages of his book one by one.

Born in Las Vegas, Nevada, Busch first started driving a makeshift go-kart around the dead ends of his Las Vegas neighborhood. His driving career began in 1998, after his 13th birthday. At the age of 16, he began competing in the NASCAR Craftsman Truck Series.  A few of his races were canceled due to his young age.

As soon as he turned 18, he entered the NASCAR 2003 season as a development driver for Hendrick Motorsports. Kyle ran seven ARCA RE/MAX series races for the team winning him his first career win at Nashville Superspeedway. He has also won a race at Phoenix International Raceway in 2004.

After that, Busch had an uncountable number of wins and proved himself to be a legend in the field. 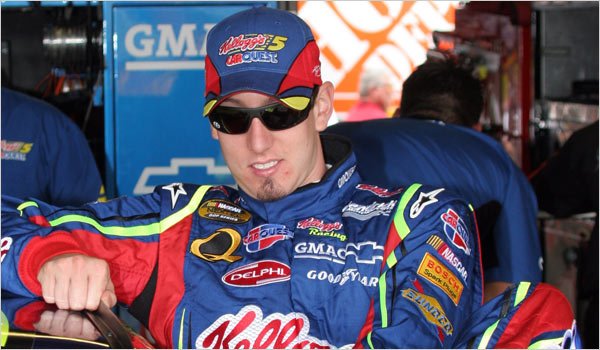 In 2018, Busch won the truck series race in Las Vegas. Now, he has won all three major touring series of NASCAR. He won his first race of the season at Texas. Kyle followed that event with another win at Bristol.

Kyle Busch owns a big 13000-square-foot mansion in Denver. He bought the mansion for $7.5 million in 2012. He also has a mansion in Mooresville which he put for sale recently in March 2018. The Lake Norman mansion was reported to be priced at $3.9 million.

Busch has earned huge earnings from his racing career and Kyle Busch Motorsports, his stock car racing team. In 2017, he reportedly made $13.3 million from salary and winnings and $1.7 million more from endorsements.

He is also sponsored by M&M's.

He currently has an estimated net worth of  $50 million.

He and his family go on vacations from time to many exotic places. In the racetrack, he drives a Toyota Camry.

Kyle Busch is married to Samantha Sarcinella and has a son named Brexton Locke Busch. Together, they often go on vacations. They have visited Cabo in Mexico and The Bahamas. The parents always give time to their son despite their busy schedule.

After doing his best in racing, Kyle has finally found his happy ending and is quite deserving of it.

Read more about his married life.