Gossip Who Is Racing Car Driver Kyle Busch Married To? Know About His Relationship With Wife

Who Is Racing Car Driver Kyle Busch Married To? Know About His Relationship With Wife

Kyle Thomas Busch, nicknamed Rowdy Busch, is an American professional stock car driver currently competing in the Monster Energy NASCAR Cup Series and drives the No. 18 Toyota Camry for Joe Gibbs Racing along with Kasey Kahne. 32-year-old Busch, who is also the owner of Kyle Busch Motorsports, is the 2009 NASCAR Nationwide Series Champion and the 2015 NASCAR Sprint Cup Series Champion.

Besides his achievements in the racing career, Kyle Busch is also famous for his lovely relationship with his longtime girlfriend and now his wife Samantha Sarcinella. The couple with their 7 years of marriage is living a  happy married life and share a son together. Curious about the details? Scroll down for Kyle Busch's relationship, married life, affairs, and children.

Married Life of Kyle Busch and Samantha Sarcinella, Their Relationship

Kyle Busch, the 2016 ESPY Awards winner for the Best Driver has been successfully leading his relationship with his soulmate Samantha Sarcinella. Reportedly, the couple got married on December 31, 2010, in Chicago, after 3 years of dating.

Thank you @samanthabusch for making the last 7 years amazing. I love the time we get to spend together and the life we share together! ?? to forever more ??

Well, the further wedding detail is not disclosed, but we do have the video of the couple's beautiful wedding. Check this out.

And even after 7 years of their marriage, the lovely couple seems to be deeply and madly in love with each other. The couple free from the rumors of mishaps of separation or divorce is free from the records of past affairs as well.

The lovebirds even can be seen together sharing lovely moments on the social media.

Ready to ring in the new year & celebrate our anniversary! ?? @samanthabusch ???? #HappyNewYear #18in18

Probably, you are curious to know how Kyle and Samantha met. Let's know.

Well, as reported, the couple met back in 2007 in a car race event. The same year, Busch became the first Nextel Cup Series driver to win in the Car of Tomorrow. Back in 2017, Kyle with his fitness model-wife Samantha at West Hollywood revealed that the couple is together for about 10 years.

Talking about how their relationship bloomed, Kyle said in a statement:

"I was in college, going into my senior year at Purdue, so we kept it really casual at first. There was one night that we were on the phone for two and a half hours … that’s when I was like, ‘Wow, I kind of like him."

And after making their relationship public in 2008, the couple got engaged in February 2010. 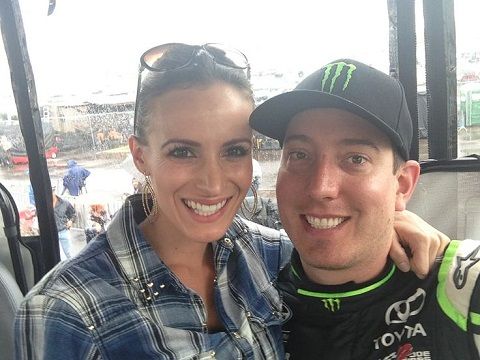 The married couple is also enjoying the life with the newborn, a son Brexton Locke Busch.

Kyle announced the news through a Tweet on November 28, 2014, and  even hinted on the baby's sex in the caption "BOY oh BOY do we have a lot to be thankful for! (Hint hint ??) Happy Thanksgiving!"

BOY oh BOY do we have a lot to be thankful for! (Hint hint ??) Happy Thanksgiving! pic.twitter.com/JhVCSMVORp

The couple welcomed their son Brexton Locke Busch on May 18, 2015. And as per Kyle's tweet, his newly born son weighed 7 pounds, 10 ounces. Have a look at the adorable baby.

The happy family can be seen sharing moments together.

Perfect weather for a @knightsbaseball game w the family. ????

We wish them a lot of happiness. Stay tuned for more.