In the car racing industry, F1 or formula one racers are known as the wealthiest athletes in the sport. Although NASCAR and other car races have their following, F1 is far more known worldwide. And as such, Sergio Perez massed massive fame and fortune from F1 racing. And currently, Perez holds an estimated net worth of millions. And the Mexican F1 racer spends his money to deliver a luxurious life for his wife and kids!

The initial years for the F1 racer weren't filled with riches. Perez started his career in Formula One career under the Sauber banner. Besides, Sergio replaced the former Sauber driver, Nick Heidfeld, in the 2011 season. And the Mexican racer finished in the 7th position in his first race in F1. Although he wouldn't bag a win until 2020, Perez still earned a hefty cheque from his career.

While the top braces of F1 racers own hundreds of million as their net worth, new formula one racers only own a couple of million. And with Sergio Perez's recent wins, he accumulated more wealth than ever. As of 2022, Sergio holds a roughly $30 million net worth! 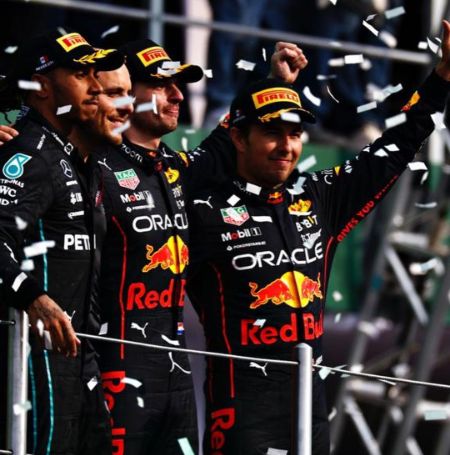 After his recent win in the F1 racing in 2022, Perez gained a vastly better deal with his team. Likewise, Sergio's team offered him a total of $10.25 million a year. Similarly, his base salary is estimated to be around $7.15 million. Again, the team will pay him a potential bonus of $3.10 million.

Perez gained a massive increase in his paycheque in 2022. In 2021, he allegedly received only $5 million a year. And by no means is it a small amount, but in 2022, the talented Mexican racer earned double what he received in 2021.

And after winning the two races in 2022 only, Sergio earned a lucrative contract with Red Bull Racing. Similarly, Perez gained a two-year extension from his RBR. And if the racer wants, Perez can add one more year with his current team.

Over the years, the biggest supporter of Sergio Perez and his racing career was his home country's brands. And Sergio signed two personal sponsors from his country. Telmex and Telcel, Mexican telecommunication companies, hold an endorsement deal with the F1 racer. 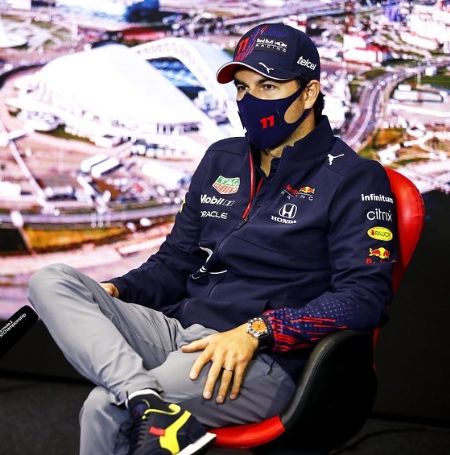 Aside from these two of the biggest brands from Mexico, Claro also signed an endorsement deal with the talented racer. Similar to Telmex and Telcel, Claro is a telecommunication company. From them alone, Sergio earns millions of dollars.

Perez also held a sponsorship from a sunglasses company. The Hawkers were one of the biggest supporters of Sergio. However, the deal with Hawkers ended, and they haven't renewed their contract yet.

Sergio Perez and his wife, Carola Martinez, dated years before tying to knot!

Before getting hitched, Sergio Perez and his wife, Carola Martinez, started going out in the mid-2010s. And over the years, things for the couple, Perez and Martinez, went smoothly. Carola and her husband, Sergio, fell in love with one another and tied the knot in 2018. Sergio Perez took a picture with his wife and son on his wedding day. SOURCE: Facebook

The F1 racer proposed to his long-time girlfriend, Carola, in August 2017. After almost a year after Sergio popped the question, Perez and Martinez exchanged their vows. And on June 3, 2018, the duo tied the knot in a private ceremony.

Despite the lovey-dovey relationship the duo shared, Sergio's relationship with Carola became public in 2017. Similarly, Martinez and Perez welcomed their first baby a year before their wedding. And over the years of their marriage, Sergio kept himself away from any scandals.

After four years of marriage, Sergio and Carola remain blissfully married. And from the looks of it, the duo intends to keep true to their vows until death do they part. Also, the lovebirds remain free of any news of divorce or splitting.

Sergio and his wife welcomed three children together!

Sergio Perez and Carola Martinez gave birth to their eldest kid before becoming husband and wife. In 2017, a year before their wedding, Martinez welcomed Sergio Perez Jr. into the world. 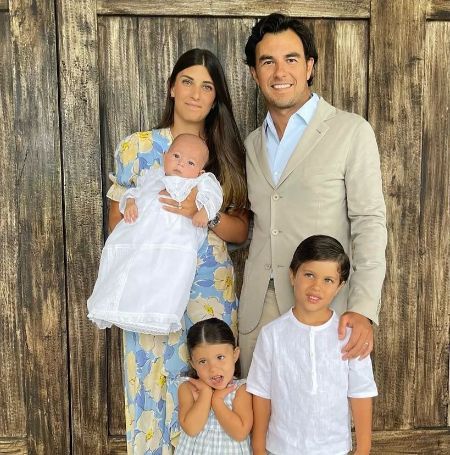 And right after their wedding, Sergio and Carola conceived their second kid. And on September 15, 2019, the married duo welcomed a healthy young baby girl, Carlota Perez Martinez. Attentive mother and a loving wife, Carola looked after Sergio's house and kids.

A couple of years after Carlota's birth, Carola became pregnant again. And in May of 2022, Martinez gave birth to her youngest child. Also, she and her husband named their youngest Emilio Perez.

Carola Martinez Deleted All of the Photos on her Instagram!

It may be nothing to be worried about, but Carola Martinez, who has over a hundred thousand followers, deleted everything from her Instagram account. Despite holding such numbers as her followers, Martinez cleansed her IG account.

Carola's husband also holds mind-boggling numbers as his followers. Sergio's Instagram has over five million followers. However, Perez rarely posts things about his family to his fans. As such, much about the F1 racer and his family stays hidden from the world. So, after Carola deleted everything from her IG, Sergio's personal life remains out of reach.

Sergio was a married man once before!

Sergio Perez is one handsome devil; as such, the F1 racer held many relationships in the past. And before marrying Carola Martinez, he was married to another woman. Perez and a woman named Andrea Campillo Vivanco used to be husband and wife.

Perez and Vivanco later grew apart and decided to end their marriage. However, when and the hows about Adrea's married life with the Mexican racer stay hidden. Similarly, Sergio prefers to keep his previous relationships hidden from the world.