Busch is currently married to his wife Samantha Sarcinella since 2010. As of 2019, he has an estimated net worth of $50 million.

Forbes has ranked him 8th in their list for Richest Nascar Drivers. His earnings from the winnings and salary were $9.6 million while he earned $1.9 million from endorsement that year. Busch earned around $14.7 million in 2017.

Apart from his annual earnings, he is also fond of luxurious houses and cars. He put his $7.3 million estates in Denver sold in 2012. The house covers the area of  13,000-square-foot and consists of all the facilities neede din a well-equipped apartment. 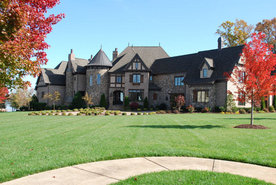 Kyle Busch is one of the most valuable assets of the racing world. He is earning an excellent salary. He has revealed his net worth among his fans. He has admirers that follow him on social networking sites. Moreover, detail info about his life and bio can be seen on Wiki.

Talking about his bio and affairs, Kyle Busch is a married man. He got married to his long-term loving girlfriend, Samantha Sarcinella. The couple tied their knots in 2010, in a ceremony among their family and friends. Since getting married to till date, they have been living happily together.

They share strong love and affection with each other, and this is the reason they are successful in their marriage life. Samantha completed her graduation from Purdue University. She received a degree in Psychology. 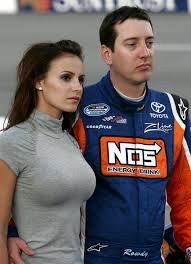 Kyle and his wife Samantha Sarcinella on the start of the NASCAR Nationwide Series Lipton Tea 250 at Richmond International Raceway on May 1, 2009 SOURCE: zimbio.com

They have a son named Brexton Locke Busch, born on May 18, 2015. He is a younger brother of Kurt Busch who is also a professional stock car racing driver. Currently, he competes in the NASCAR Sprint Cup Series.

He is famous on media and is one of the cover drivers of the NASCAR Kart Racing. In 2006, Kyle established the Kyle Busch Foundation, which provides essential tools for less fortunate children from all around the country. He is a good friend of fellow NASCAR drivers, Larry McReynolds, and Kasey Kahne.

Kyle Busch was born as Kyle Thomas "Rowdy" Busch on 2 May 1985, to American parents, to Tom Busch and Gaye Busch. He was born and raised in Las Vegas, Nevada, the United States along with his brother Kurt Busch. Talking about his nationality, he is an American citizen and belongs to white ethnicity.

Kyle Busch is popular among his fans as a professional stock car racing driver and team owner. At this moment, he drives the No.18 Toyota Camry in the NASCAR Sprint Cup Series. He also operates the NO.18 Camry in the XFINITY Series for Joe Gibbs Racing. Kyle Busch is the owner of Kyle Busch Motorsports that runs numerous trucks in the Camping World Truck Series.

Shortly after his 13th birthday, he started his driving cars Vegas, Nevada.reer. From 1999 to 2001, he managed to win 65 races in legends car racing. At the age of 16, he started competing in the NASCAR Craftsman Truck Series (currently Camping World Truck Series). He is one of the most consistent racers of all time.

In 2003, he made his entry as a developmental driver for Hendrick Motorsports. He is one of four drivers who has managed to win the championship in Sprint Cup Series and Xfinity series. His last win came in 2016. He is one of the great racers of all the time. He has 326 races over 14 years in NASCAR XFINITY Series and 417 races over 13 years in NASCAR Sprint Cup Series. Countless awards have honored him through his professional career. In 2016, “2016 ESPY Awards honored him as a Best Driver.

Well, there is a lot more to know about car races, visit the site Playerswiki.com for other updates.