Age 32, Nico Rosberg Is In a Married Relationship With Wife Vivian Sibold Since 2014, Has a Daughter

Apart from rival/teammate Lewis hamilton's high flying flings, F1 racer Nico Rosberg always had a steady relationship with only one person. Nico who is a dual citizenship holder of German and Finland raced under the flagship of German. He won 2016 Formula One World Champion.

He has had a long-term relationship with a wife Vivian Sibold. They have been together for more than 14 years. Together they are a great team of parents to their daughters. The couple was longtime childhood sweethearts who dated for 11 years before finally getting hitched.

Marriage with Vivian and daughters

Nico and Vivian are childhood sweethearts. They dated each other for 11 years before finally getting hitched. They got married in July 2014 surrounded by their family members and closest friends. Their marriage ceremony was announced by the racer himself through his social media account. 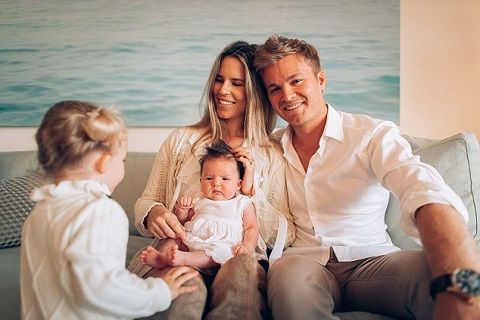 They welcomed their first daughter Alaïa Rosberg in August 2015 after a year of their marriage. They are great parents to their daughter and perfect partners to raise a healthy child together when the papa is working late hours and has less time for family.  They had their second child: a daughter Naila Rosberg in 2017. Vivian is a great wife and a mother says, Nico.

When F1 racer put pressure on himself not only his work people made sure he got every motivation and attention to achieve his goal but his wife was a partner with him all the way.  His target of winning the F1 race was put before everything and during that time, Vivian took care of the family part. She looked after their daughter Alaïa and gave space for Nico to recover from racing and have enough rest.

Because of how much strenuous the work pressure has put on the family, Nico decided to quit professionally after winning the 2016 Formula One World Championship. At only 32 he surprised the world by his early retirement. He retired just before the start of 2017 racing season and announced of his continuance in the racing sector as an ambassador to Mercedes. The couple lives in Ibiza where Vivian has an ice-cream parlor named Vivi's creamery.