Leati Joseph Anoa’I popularly renowned with the ring name of Roman Reigns is an American professional wrestler who is currently signed to World Wrestling Entertainment (WWE) under the RAW brand. He is also a former professional Canadian football player. Currently, he is on hiatus due to an ongoing battle with leukemia.

As of 2018, Roman Reigns has an estimated net worth of $9 million. Regarding his personal life, he is married and blessed with three children together with his wife.

Roman Reigns was born on May 25, 1985, in Pensacola, Florida, the United States, to Sika Anoa’I (Father) and Patricia A Anoa’I (Mother). He holds an American Nationality and belongs to half-Samoan and half-Italian ethnicity. His Zodiac sign is Gemini.

His father is an American Samoan retired professional wrestler. Moreover, his brother, Rosey was also a professional wrestler who died on April 17, 2017.  Not to mention. Reigns is a member of the Anoa’I Family, he is a cousin of former wrestlers Yokozuna, Rikishi, Umaga, the Usos, The Rock, and the Tonga Kid.

Roman initially enrolled at Pensacola Catholic High School, where he played football for three years before playing at Escambia High School. Upon graduation, he attended to Georgia Institute of Technology where he played collegiate football.

As Roman Reigns remained undrafted in the 2007 NFL draft, he was signed by the Minnesota Vikings in May 2007 but was released the following month. Subsequently, the Jacksonville Jaguars signed him in August 2007, only to release him less than a week later prior to the start of the 2007 NFL season.

In 2008, Reigns was signed by the Edmonton Eskimos of the Canadian Football League (CFL). Wearing the jersey No. 99, he played for a season with the team, featuring in five games, of which he started three. That same year, on 10th November, he was released by the Eskimos and proceeded to retire from professional football.

In July 2010, Roman Reigns made his first attempt into wrestling, signing a developmental contract with World Wrestling Entertainment (WWE). Later, he was assigned to their developmental territory Florida Championship Wrestling (FCW). On September 9, 2010, he made his pro wrestling debut using the ring name Roman Leakee, in a loss to Richie Steamboat.

On November 18, 2012, Reigns made his main roster television debut at Survivor Series alongside Dean Ambrose and Seth Rollins. The team attracted lots of fans in a short interval of time. However, after two years he decided to start his solo career and left the team Shield.

Furthermore, in October 2017, due to issues with The Miz, The Miztourage, Cesaro, and Sheamus, all three members of The Shield ultimately decided to reform, with Reigns being the last member to consider doing so.

In the episode of October 22, 2018, Roman Reigns dropped down his Universal  Championship title and revealed that he is taking a break from wrestling due to being diagnosed with leukemia. He made his return to the RAW on February 25th, 2019.

Half Samoan and half Italian Roman Reign is a married man. He met his wife, Galina for the first time in their college days at Georgia Tech University. At the time, Galina was also an athlete in college.  Soon the two started dating each other and after 9 years of togetherness, they got engaged on February 26, 2012.

They tied the knot in 2014 at Disney’s Castaway Cay, a private island in the Bahamas. 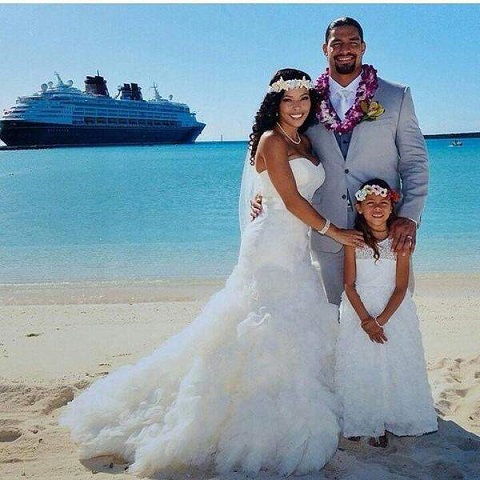 Furthermore, the couple is blessed with an adorable daughter whom they have welcomed in the year 2008. In 2016, their twin sons were born.

Besides this, there are no records of his past affairs and girlfriend.

Apart from his love life, Roman Reigns is a Roman Catholic and uses the sign of the cross every time he enters the ring. Further, he considers Bret Hart his wrestling idol.

An emergent wrestler Roman Reign currently has millions of fans, and most of them admire him. He is popular among the social networking sites like Facebook, Instagram, and Twitter.  He has a perfect body structure with an amazing tattoo. He stands a height 6 feet 3 inch and his weight is around 120 kg.

Roman Reigns Salary and Net worth

Not only name and fame but Roman Reigns has earned tremendous net worth through his pro wrestling career. The income of WWE superstars normally consists of their base salary, bonuses, and outside income. As of 2018, his net worth is estimated $9 million. According to the source, his annual salary is reported to be $2 million.

In  2017, Roman Reigns made a total of $3.5 million making him the 4th highest paid wrestler of the year. The previous year, he had earned $2.1 million and so he is definitely making financial progress.

Apart from wrestling, he adds a decent sum through TV and films.

His fans can follow him on social networking sites for his personal updates and information. Further details can be obtained from Wikipedia.