Sean Michael Waltman is an American professional wrestler who has been wrestling over the past three and half decades. He is known under his ring names 1-2-3 kid and X-Pac in the World Wrestling Federation (WWF) but now changed to WWE, Syxx in World Championship Wrestling and as Syxx-Pac in Total Nonstop Action Wrestling.

Born on 13 July 1972 in Minneapolis, Minnesota, United States, Sean had self-described his childhood as troubled. He was raised by a single mother and stated that he was unsupervised since he reached 5 years of age.

He was molested several times and had dropped out of school when he was in ninth grade. He was interested in wrestling since his young age and therefore, he had joined in the school wrestling team but quit it rather cut his hair.

Sean Waltman had a lot of interest and enthusiasm for wrestling since his young age due to which he spent his times around wrestling ring working for free. He got trained under Joe Malenko, Boris Malenko, Karl Gotch, and Masami Soronaka.

He then made his debut in wrestling as The Lightning Kid. He had worked through various independent promotions including Global Wrestling Federation, Pro Wrestling America.

He won PWA Light Heavyweight title, PWA Iron Horse TV title, and the GWF Light Heavyweight Championship. During his early years, he worked together with Jerry Lynn winning the PWA Tag Team titles two times. After Jerry Lynn was advised to give up wrestling completely due to his health issues, Sean made his way to WWF as The Lightning Kid.

Sean spent three years of his initial year career in WWF. In 1996, he joined at World Championship Wrestling (WCW) but was fired by the WCW President Eric Bischoff via Federal Express on late 1998. Sean returned to WWF, the night after WrestleMania XIV in 1998.

He became “X-Pac” during that time and feuded with Jeff Jarett. He was in WWF till 2002. His time in WWF was quite an entertaining one. Afterward, he played for TNA and Xtreme Pro Wrestling.

Since 2006 till 2008, he was associated in Wrestling Society X and National Wrestling Alliance.

He later worked there as a Scout and Evaluator in Florida Championship Wrestling. In March 2013, he was signed to WWE Legends contracts.

He is still working in the WWE appearing rarely on the ringside but full time in the backstage.

Moving on to his personal life, he was once married. He was 19 years old at that time. He was married on 21 April 1994 to his wife named Terry, who was his teenage girlfriend. He has two children from her named Jesse, a son born in 1992 and a daughter named Kaitlyn born in 1995. The marital relationship was going smoothly for until some years but could not sustain the happiness for long, resulting divorce in 2002.

After his divorce, he was in a relationship with the WWF divas Joanie Laurer known as Chyna. 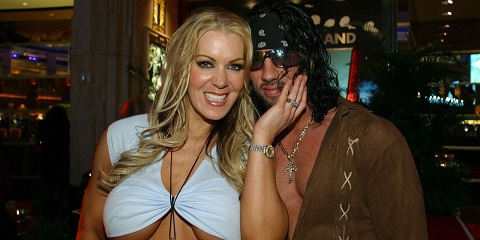 Following his affair with Chyna, she dated former WWE Divas, Alicia Webb. He is currently believed to be single.

He also had appeared in ESPN’s E: 60, a documentary on Scott Hall’s experience.  He also hosted a weekly podcast.

As a successful wrestler, Sean Waltman has maintained a pretty amount of bank balance through his earnings. As per the reports of Celebrity Net Worth, he has an estimated net worth of $500 thousand.

Sean Waltman has a height of 6 feet 1 inch, which is around 1.85m. He has a body weight of 96 kg. He is an active user of social networking sites. He has 18.4k followers on Instagram and 453k followers on Twitter respectively.