Bliss became the first woman to have won both the Raw and SmackDown Women's titles and is an overall four-time champion in WWE.

Alexa Bliss was born as Alexis Kaufman on August 9, 1991. She was born to American Parents, Angela Kaufman and Bob Kaufman in Columbus, Ohio, the United States. Talking about her nationality, she is an American and her ethnicity is white. Her birth sign is Leo.

From her early age, she has shown her great interest towards the sports. At the age of five, she started playing kickboxing, softball, track, and gymnastics. She also participated and performed in the bodybuilding competition. She also has shown his excellence in the Arnold Classic.

Alexa Bliss's Net Worth and Endorsements

As of 2018, The 26 years old both Raw and SmackDown WWE Diva Champion, Alexa Bliss has an estimated net worth of $2.3 million in 2018, $2 million less comparing to fellow Divas, Mickie James including all of her assets and earnings.

The talented player has earned a good sum of money. Her annual salary is reported to be $350,000. Maximum of her net worth is build through her professional wrestling career.

On May 8, 2014, she competed in an NXT and WWE Divas Champion Alicia Fox was defeated by her. However, Charlotte defeated her in the semi-final. On June 19 episode of NXT, she defeated Sasha Banks. Later on, she also played and performed in several matches of WWE: NXT. On July 2016, she was drafted to the Smackdown. She just started his professional career and has to achieve a lot. Alexa Bliss joined the seventh season of Total Divas on July 24, 2017.

Happy birthday @themickiejames !! Thanks for being the best partner in crime a girl could ask for!! 👯‍♀️ enjoy your day !! Xoxo 😘😘 #Bingo !!!

In June 2018, she won the RAW Women's Championship for the third time defeating Nia Jax. However, she lost her title to Ronda Rousey at SummerSlam in August.

Coming into her personal life and affairs, she isn't married yet and isn't single either. She is having a longterm boyfriend, Matthew Adams, a professional wrestler better known by his ring name Buddy Murphy. The couple is in a relationship since 2012 and is still together and has celebrated their engagement ceremony exchanging their rings. 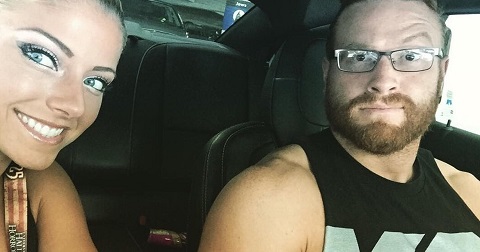 Bliss revealed in an interview with Gorilla Position that she and Murphy got engaged around Christmas 2015. She was also linked up with Braun Strowman some months back.

She is popular among her fans. Apart from her love life, she is also a fan of Disney. Despite being such a popular celebrity of wrestling, she has never been the part of any controversy and rumors.

Her body measurement is 34-24-34. Her eye color is blue and the color of the hair is blonde. She has an average height of 5 feet and 1 inch. Her body weight is around 46 kg. She looks amazing on her Bikini avatars while at the ring. Her fans and followers also follow her on Twitter and Instagram.