Randal Keith Orton popularly known as Randy Orton is a famous American professional wrestler who currently is signed to WWE performing in Smackdown Brand. He is a nine times WWE Champion, 4 times world heavyweight champion, a former Intercontinental champion, United States champion and has been a tag champion with wrestlers such as Edge and Bray Wyatt.

Before he became a full WWE wrestler, he worked with the territorial wrestling promotion, Ohio Valley Wrestling. Nicknamed as The Viper and Legend Killer, he has also won the Royal Rumble in 2009 and 2016, Money in the Bank Winner in 2013 as well as headline several WWE main event and PPV  like Wrestlemania.

Randy Orton of American nationality was born to Second generation wrestler, Bob Orton Jr, and mother, Elaine Orton on April 1, 1980, at Knoxville, Tennessee. He has two younger siblings: a brother named Nate Orton who is a stand-up comedian and a younger sister named Rebecca Orton.

Orton graduated from Hazelwood Central High School in 1998 then joined the  United States Marine corps and was suspended due to bad misconduct and subsequently court-marital.

He started his wrestling career in 2000 and in 2001, he signed with Ohio Valley Wrestling where he trained to be a professional wrestler.

Randy Orton Net worth and Salary

Randy Orton recently extended his contract with WWE in 2018. As per his latest contract, his estimated salary while working as a full-time wrestler for WWE is around $ 4.5 Million and also receives an additional 3.25% bonus for Merchandise sales and other revenue shares.

Brock Lesner is the highest paid WWE superstar at current with the annual salary of $12 million.

Orton was previously under a 10-year contract and his salary was reported to be $1.6 million during that time and additional bonus from match wins, PPV sales and revenue shares. Besides, he earns additional income from his endorsement deals.

Randy Orton is one of the faces of WWE, his total net worth is to above $ 15 million as of 2018. His movie earning is also the source of his net worth.

He has a variety of cars to his extensive collection and is rumored to own Hummer brand worth $ 40,000. Prior, his endorsement deals with several brands is also the secondary source of his earnings.

Randy Orton made his official debut in the WWE at Wrestlemania X8 Fan Access, where he was defeated by Tommy Dreamer.

He made his WWE televised debut against Hardcore Holly in a victorious effort on April 25, 2002. His stardom came into prominence when he aligned with wrestlers such as Triple H, Ric Flair, and Batista to form a stable called Evolution.

While with the group, he won his first WWE title by winning the Intercontinental Championship by defeating Rob Van Dam at Armageddon in December 2003.

He created history when he becomes the youngest wrestler to win the World Championship at the age of 24 at Summerslam 2004.

Orton after his time with the group, Evolution went to have several feuds with legends like Undertaker, Shawn Michaels, John Cena and Daniel Bryan to a name a few.

He recently competed at Wrestle Mania 34  where he lost the United States Championship to Jinder Mahal in a fatal four match that includes wrestler such as Bobby Roode and Rusev.

Orton also was seen at the Jimmy Kimmel in 2004 and appeared on the game show, Deal or No Deal in March 2007 and featured in WWE Video games like WWE Immortals, WWE 2k18 etc.

Randy Orton was previously married to Samantha Speno in September 2007 and the couple is blessed with a daughter, Alanna Marie Orton born in July 2008. 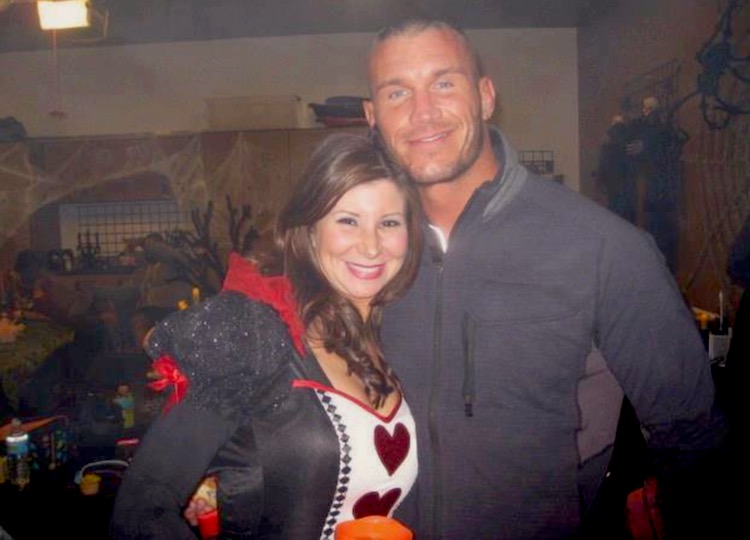 The pair got divorced in 2013. Orton is currently married to Kimberly Kessler since November 14, 2015. His daughter, Brooklyn Rose Orton ( second from Kimberly Kessler) was born on November 2006.

He is rumored to be have dated, WWE  ring announcer, Jojo Offerman in 2013.

Besides, he was also involved in the WWE Wellness Policy program involving Steroid allegation.