Marco Reus is a German professional football player who is currently playing as a forward for Borussia Dortmund and the German national team. He is renowned for his versatility, speed, and technique. He was the Footballer of the Year in Germany in 2012.

Marco Reus was born on 31 May 1989, to German parents, Manuela Rues and Thomas Rues. He was born and raised in Dortmund, West Germany. As a youth, he began to play football for his hometown club Post-SV Dortmund in 1994 and joined the youth ranks of Borussia Dortmund in 1996.

Net Worth and Salary of Marco Reus

Marco Reus has an estimated net worth of $20 million in 2018 including all of his properties and earnings. He is currently receiving an annual salary of $11 million from his present club.

Apart from his earnings from his club, he too endorses brands like Hugo Boss, Panasonic, and Puma. His present market value is recorded to be $34 million in 2018. Maximum of his net worth is built through his professional football career.

Marco Reus signed a four-year contract with Bundesliga club Borussia Mönchengladbach on 25 May 2009. On his Bundesliga debut, he scored his first Bundesliga goal in a game against Mainz 05. He was in the club for four successful seasons, appearing in 97 matches and scoring 36 goals.

Reus signed with his former club Borussia Dortmund for five years on 4 January 2012. He made his Bundesliga debut with Dortmund on 24 August; he scored a goal as his new side completed a 2–1 win over Werder Bremen. On 3 October, in Reus's first ever Champions League appearance, Reus opened the scoring as Dortmund earned a 1–1 draws away to Manchester City. He still plays for the club.

Rues made his national side U-21 debut on 11 August 2009, in a friendly against Turkey. On 7 October 2011, he made his senior international debut against Turkey. He scored his first goal for the team on 26 May 2012 in a 5–3 defeat to Switzerland, through an assist from Muller.

He is included in Joachim Low's 23-man final squad for the 2018 FIFA World Cup on 4 June 2018. He will be one of the 23 players that include Ilkay Gundogan, Manuel Neuer, Mario Gomez, Mats Hummels, and Sami Khedira.

who is Marco Reus' wife?

Talking about his personal life and affairs, currently, 32 Rues is married to the top German model, Scarlett Gartmann. The couple began dating from December 2015 and are still together. They tied the knot in December 2019 in a secret wedding ceremony.

the couple has a daughter born in March 2019 before their wedding. 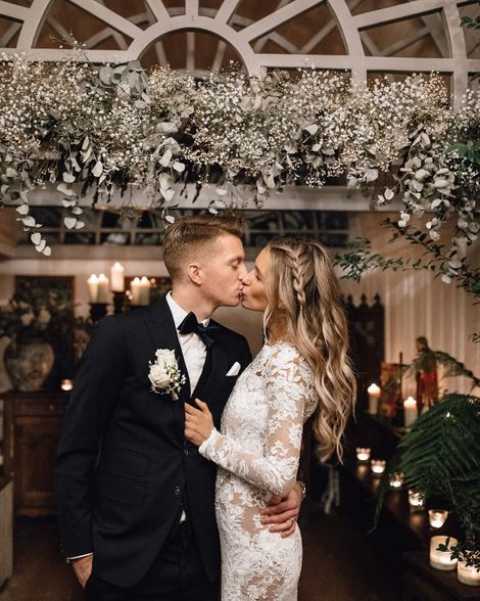 After Mesut Ozil and Mandy Capristo and Mario Gotze and Ann Kathrin Brommel, they are also the power couple of the German football team.

Reus previously dated Carolin Bohs in 2009. They broke up in 2013 but remain close friends. He was the cover athlete of FIFA 17. Reus was fined over £500,000 for driving without a valid license, which constitutes a felony in Germany. He confirmed that he now has a driver's license in August 2016.