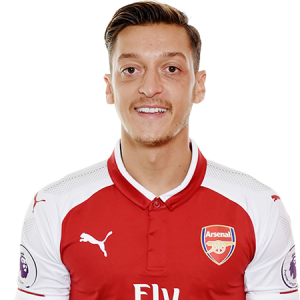 Mesut Ozil is a German professional football player who currently plays an attacking midfielder for the English Premier League club Arsenal and the German national team.

The 29 years old professional has played for clubs like Schalke 04, Werder Bremen, and Real Madrid. As of 2017, he receives an annual salary of $8 million from his present club Arsenal and has the net worth of $53 million.

Mesut Ozil was born on 15 October 1988, in Gelsenkirchen, West Germany. His parents are Mustafa Ozil and Gulizar Ozil. His three siblings are Mutulu Ozil, Nese Ozil, and Dugyu Ozil. Talking of his nationality, he holds a German nationality and belongs to Turkish-German ethnicity.

Ozil had a very rough childhood. His family was so poor that they could not afford to buy a pair of boots for him. He began playing football at the age of 9.

Mesut Ozil began his professional footballing career in 2006, joining the German professional club Schalke 04. While he debuted for the club, he was described as "the next big thing". Starting as a playmaker and central attacking midfielder in Ligapokal matches against Bayer Leverkusen and Bayern Munich, he soon proved himself as a better player. His two seasons with the club ended up with a total of 30 appearances without a goal.

He then made his move to the league's fellow club Werder Bremen on 31 January 2008, signing to a three-year contract with the club. He scored his first professional goal in the Bundesliga on 26 April 2008. His two seasons with the club ended with a total of 71 appearances and 13 goals. He further made his move to one of the world's best club Real Madrid on 17 August 2010.

He made his debut for the club on 22 August 2010, in a friendly match against Hércules and his La Liga debut came on 4th September 2010, in a match against Mallorca. He soon established himself as one of the best midfielders in the world. He played for the club for three years appearing in 105 games and scoring 19 goals. Ozil was the crucial member of the team that won La Liga in 2012.

Mesut Ozil then made his move to the English club Arsenal on 2 September 2013. The transfer made him the most expensive German midfielder of all time. Ozil made his team debut on 14 September 2013, in a league game against Sunderland. He is one of the most prominent players on his team, he still plays for the club.

Mesut Ozil has represented his national German team at both junior and senior levels. He was named the Man Of The Match in the U-21 European Championship final. His senior international debut came on 11 February 2009, in a friendly match against Norway. He scored his first goal against South Africa on 5 September in Leverkusen at the BayArena. He has won over 88 caps for his national side scoring 22 goals. He was the key player of the World Cup 2014 Champion team along with other stars like Toni Kroos, Manuel Neuer, Marco Reus, Mario Gotze etc.

Mesut Ozil is neither married nor single but is engaged to his loving partner Amine Gulse. The engagement ceremony was held in Germany among his family and friends on May 3, 2017. The wedding is believed to be held in Ozil's hometown Istanbul.

His fiancee Amine Gulse is a former Miss Turkey.  The couple started dating each other in August 2014 and seems to be supportive of each other. His fiancee is spotted in several Arsenal's matches cheering for her partner. The couple doesn't have a child yet.

Ozil practices Muslim and is seen reciting Quran before his every match.

Mesut Ozil is indeed a wealthy man as he has an estimated net worth of $53 million in 2017, including all of his earnings and properties. As of 2017, he receives an annual salary of $8 million from his present club in the English Premier League.

Ozil has several world's best car in his collection. He owns cars like Lamborghini, Mercedes, Ferrari, Audi, Porche etc. He is the brand ambassador of Mercedes-Benz. Ozil owns a luxurious house in North London.

His recent market value is recorded to be $53 million