Manuel Neuer, AKA Manuel Peter Neuer, is a German professional soccer player who plays as a goalkeeper for the German national team and Bayern Munich. He started his professional career with Schalke 04 in 2004 before joining Bayern Munich in 2011.

He is adored for his quick reflexes and exceptional shot-stopping skills. Neuer won a Golden Glove Award while leading a German team to a World Cup Championship in 2014. He is also regarded as one of the best goalkeepers at current.

Manuel Neuer was born on March 27, 1986, in Gelsenkirchen, West Germany. Born to Peter Neuer and Sarita Neuer, he was raised in a Catholic home and is a proud member of the Gelsenkirchen-based Catholic Church.

Further, the German soccer star belongs to the Caucasian white ethnicity, and his birth sign is Aries. His brother Marcel is also associated with football. He worked as a football referee in the Verbandsliga.

Neuer's goal was to be a successful football player, and he started his youth career in 1991. He played for the Schalke 04 for 14 years. He turned professional in 2005 and started his professional career playing for the senior team of Schalke 04. 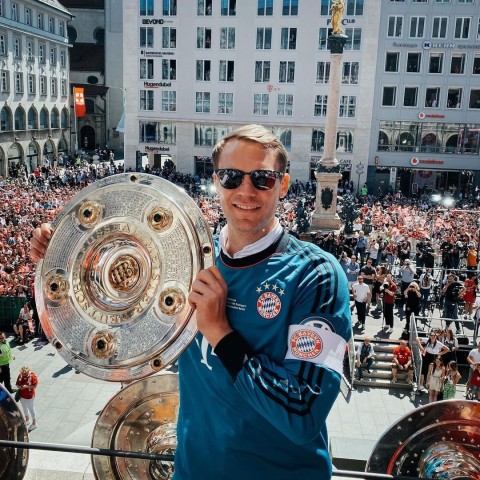 In 2011, he signed a contract with Bayern Munich for five years. The contract ended in June 2016 but was renewed again. He also played in Germany U18, Germany U19, Germany U20, and Germany U21, and from 2009, he served as a successful goalkeeper of the German national team.

Manuel Neuer earned his stardom by delivering his remarkable FIFA 2014 World Cup performance. His quick reflexes and outstanding shot-stopping capabilities helped his team to win the tournament. He was an incredible player and finished 3rd in voting, behind Lionel Messi and Cristiano Ronaldo, for the FIFA Ballon d’Or award. In the same year, The Guardian was also ranked as the third best player in the world.

Manuel Neuer is married to his beautiful girlfriend, Nina Weiss. The couple started dating each other in early 2017 and tied the knot the same year. They first married in a civil ceremony in Tannheim, Austria, and had their church wedding in the Cathedral of Santissima della Media in Monopoli, Italy. Mario Gotze also attended the wedding with his girlfriend. Nina is a Chicago-area fine artist and a teacher. 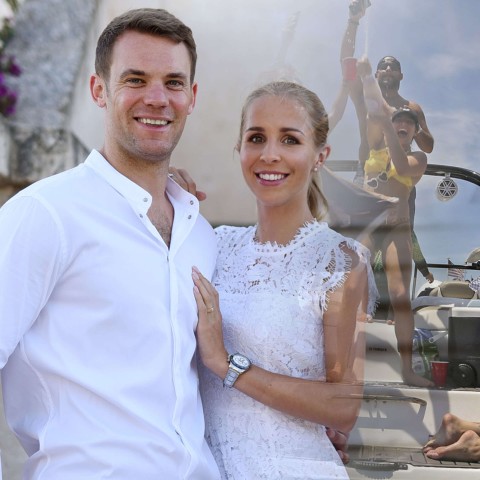 Neuer with his wife at a vacation SOURCE: Getty Images

Neuer was previously in a relationship with his former girlfriend Kathrin Gilch for many years. They were often spotted together in many sporting and red carpet events. However, due to some circumstances, the lovely couple separated in 2014. They first met in 20018 in Greece while Neuer was on vacation.

Several South American magazines claimed that he was gay after a wrong translation of his statement, which read:

"It would be good if a professional football player came out because it would help others to do the same."

He is a Catholic Christian and donates to many humanitarian causes. Manuel Neuer also does a charity foundation for children through an organization named Manuel Neuer Kids Foundation.

Manuel Neuer has a height of 1.93 m, and his weight is around 92 kg. He has excellent career earnings and salary. His net worth is reportedly about $50 million.